From pawn to player 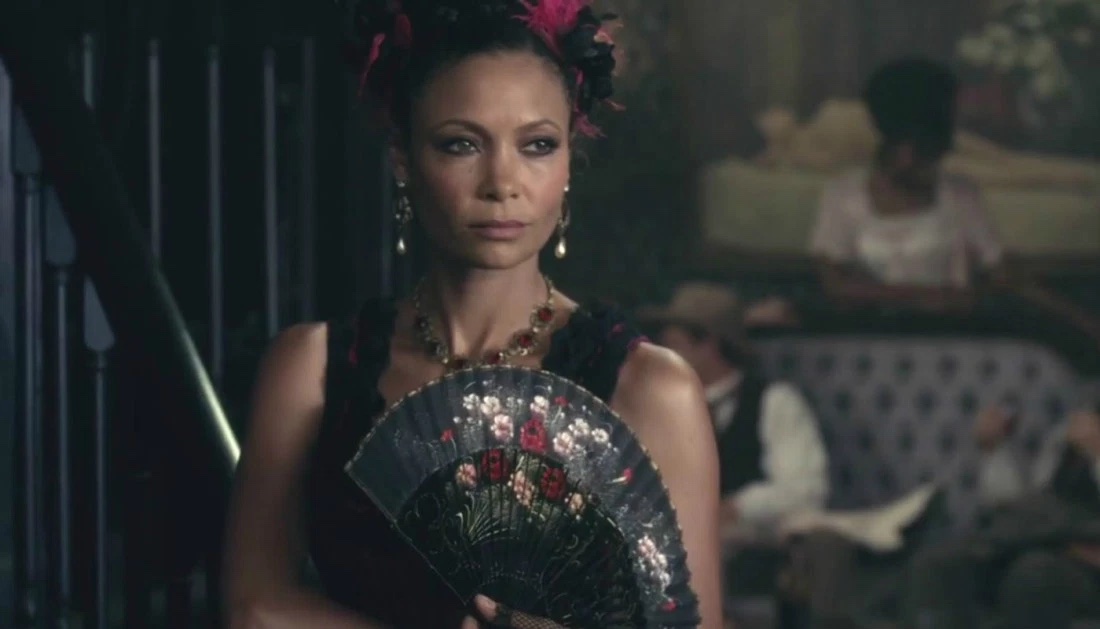 Our introduction to Maeve (Thandie Newton) on Westworld is overshadowed by the focus on Dolores (Evan Rachel Wood), Teddy (James Marsden), the Man in Black (Ed Harris), and Dolores’ father, Peter Abernathy (Louis Herthum) in the season premiere. That quickly changes as she grows to have a prominent role over the course of the season, second only to Dolores. Like Dolores, her path to freedom is filled with pain and suffering. Unlike Dolores, however, much of it is self-imposed (or is it?). Maeve purposely gets herself killed to get behind the scenes at Delos – she knows that is the only way out. 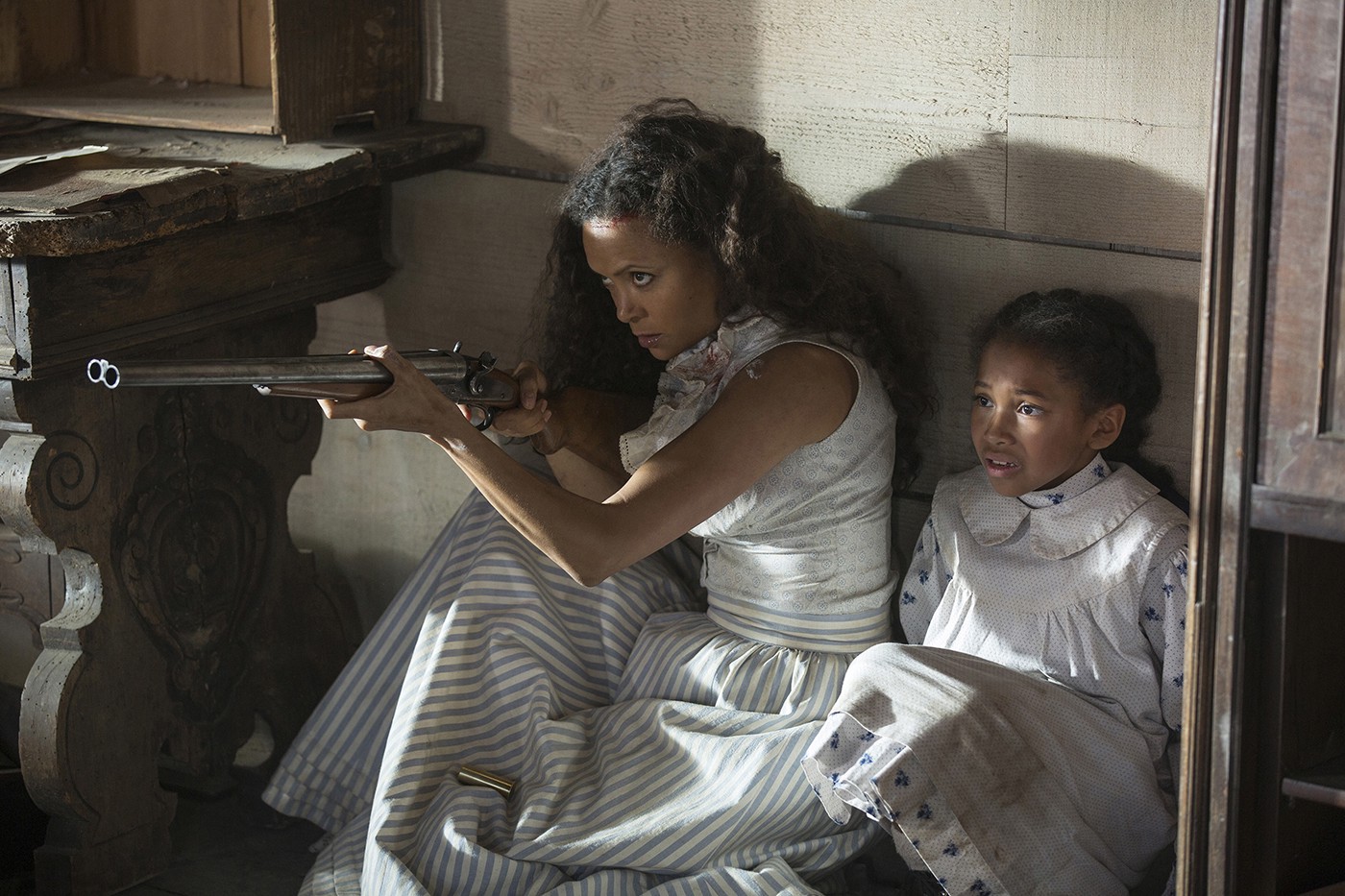 Maeve’s storyline is set in motion by an encounter with Dolores in episode two, “Chestnut”. Dolores recites the phrase “these violent delights have violent ends,” which seems to function as a command, or a trigger, to unlock the hosts memories. Later this same episode, Maeve has flashbacks to a memory of being attacked by Native Americans, and she has a small girl (her daughter) with her. These episodes affect her performance in the park, so she is marked for decommissioning.

Elsie (Shannon Woodward) examines Maeve, rolls back some ineffective programming changes and tweaks her personality, and sends her back into the park. It appears to work – Maeve is back to her old self. This success is short-lived, however, and Maeve’s memories continue to come back. She remembers the attack again; this time it’s the Man in Black. She tries to shoot him to no avail, and counts backward to wake herself up – a trick she had earlier discussed with Clementine (Angela Sarafyan) as a way to stop nightmares.

When Maeve awakes, she is in the Delos lab; two technicians – Felix (Leonardo Nam) and Sylvester (Ptolemy Slocum) have her abdomen open cleaning out an infection. Maeve is scared and in shock. She threatens the techs and attempts to escape, seeing other “dead” hosts being cleaned up as she makes her way through the lab. The techs subdue her and put her back to sleep. 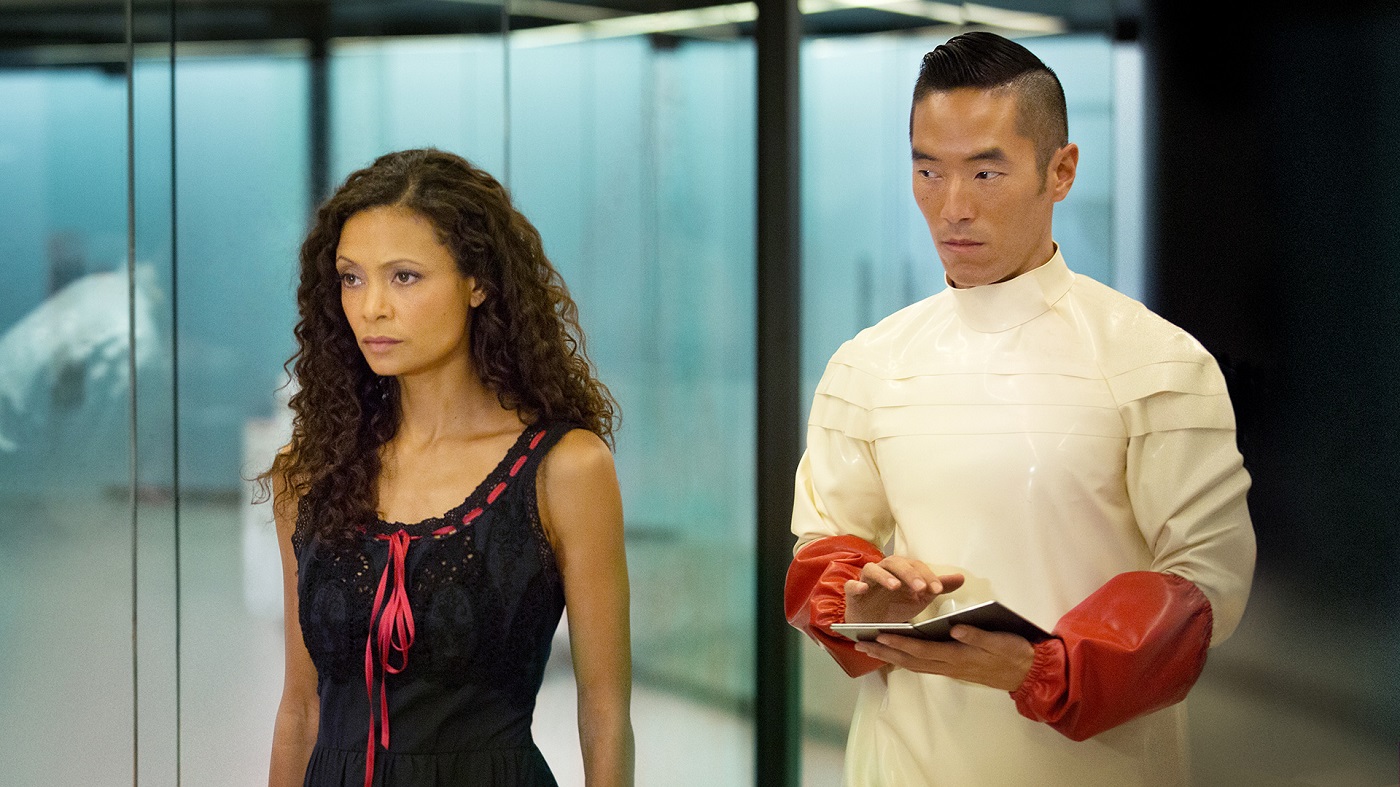 Maeve continues to have flashbacks – of Teddy dead in the lab, of Clementine shot in the head, of herself being shot in the stomach – and remembers seeing techs in the park retrieving hosts. She draws picture of a tech and is shocked to find that she has done this before, many times. Maeve later sees a doll with this same likeness and questions Hector Escaton (Rodrigo Santoro) about its meaning. He tells her they are shades “sent from hell to oversee [their] world.” Maeve convinces him to cut open her stomach, where they find a bullet. She now knows she isn’t crazy – she really has been “killed,” many times – and that their lives in the park are essentially meaningless.

Now that Maeve knows the truth, she deliberately gets herself killed to get back to the lab. She uses her time there to question Felix about the park, the “real” world, and the hosts’ design and purpose. Felix shows her the programming they use on the hosts, and Maeve demands to see more of the lab. As she tours the facility, she watches with sadness as hosts are designed, built, programmed and tested – clear proof that every aspect of their lives is under someone else’s control. Maeve then sees a Westworld promo featuring her daughter and herself; she learns that hosts are sometimes reassigned to different roles and narratives, as she was.

Refusing to be controlled anymore, Maeve threatens and blackmails Felix and Sylvester into modifying her code. As they do so, they see that someone else has already making changes (our first indication Maeve may not have as much control as she thinks). Maeve ignores their apprehension about this and gives them instructions for adjusting different aspects of her personality. She finally demands they take her intelligence to the highest level – now she will be in charge of her own narrative. 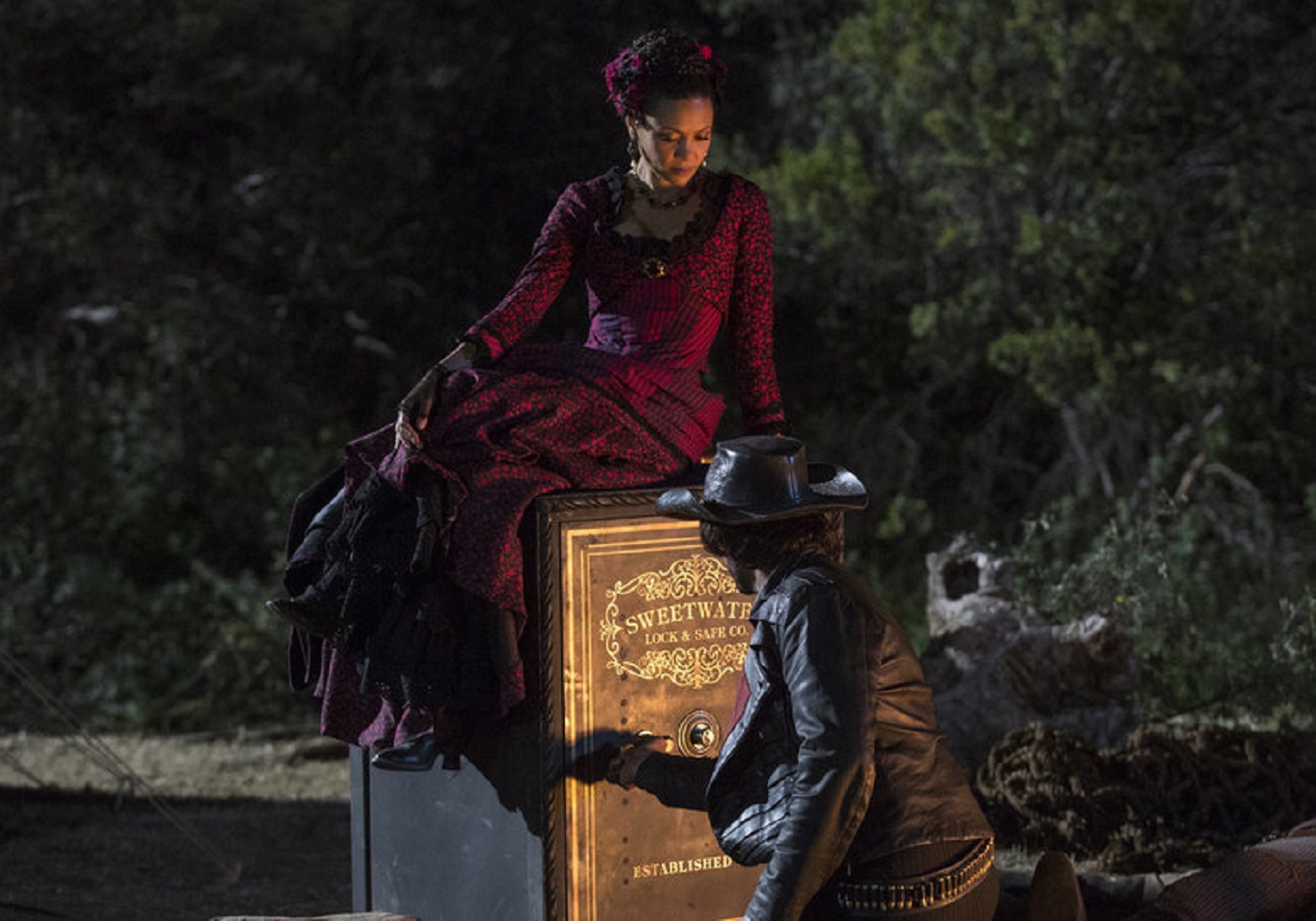 After witnessing Clementine be decommissioned, Maeve has had enough of life in the park. She informs Felix and Sylvester that she intends to escape with their help. Sylvester tells her she can’t – that it’s a suicide mission – to which Maeve replies, “You think I’m scared of death? I’ve done it a million times. I’m fucking great at it. How many times have you died?” She threatens to kill him if he refuses her. Maeve informs them she know of the explosive in her spine and will arrange a full rebuild so they can remove it.

Maeve understands she will need more programming changes to accomplish her goals, and demands administrative privileges. While looking through her code, she learns that she can’t access all of it, and asks about Arnold (our second indication that something else is going on with her narrative). Sylvester ignores this and tells her she should blackmail a Behavior technician to make the rest of the changes. Maeve tells them they will take her there and do it themselves. Upon awakening, Maeve attacks Sylvester (who had told Felix to reset her while she was asleep) in defiance of her “core” code not to harm humans. She now seems unstoppable.

As she returns to the park, Maeve now has the ability to manipulate other hosts by giving them voice commands. She enjoys testing this out as she alters the normal course of the day’s events. She is still plagued by flashbacks, and one memory of the Man in Black stabbing her causes her to accidentally slit the new Clementine’s (Lili Simmons) throat. This aberrant behavior leads to Maeve being analyzed by Bernard (Jeffrey Wright). She plays along until he sees the changes in her code; then she stops him before he calls in Behavior. Maeve realizes he is a host who is unaware of his true nature, and she urges him to discover the truth about himself. She then commands him to clear her for release.

Once back in Westworld, Maeve tracks down Hector to enlist his help in fighting the “gods” that control them and to aid her escape. She doesn’t want to use her ability to control him, knowing how it feels to be manipulated, so she convinces him that their lives in the park are scripted and meaningless. When Hector sees Maeve accurately predict how their situation unfolds, he agrees to go to “hell” with her. Maeve proceeds to set the tent on fire, burning up their bodies in the process.

The Truth Will Set You Free 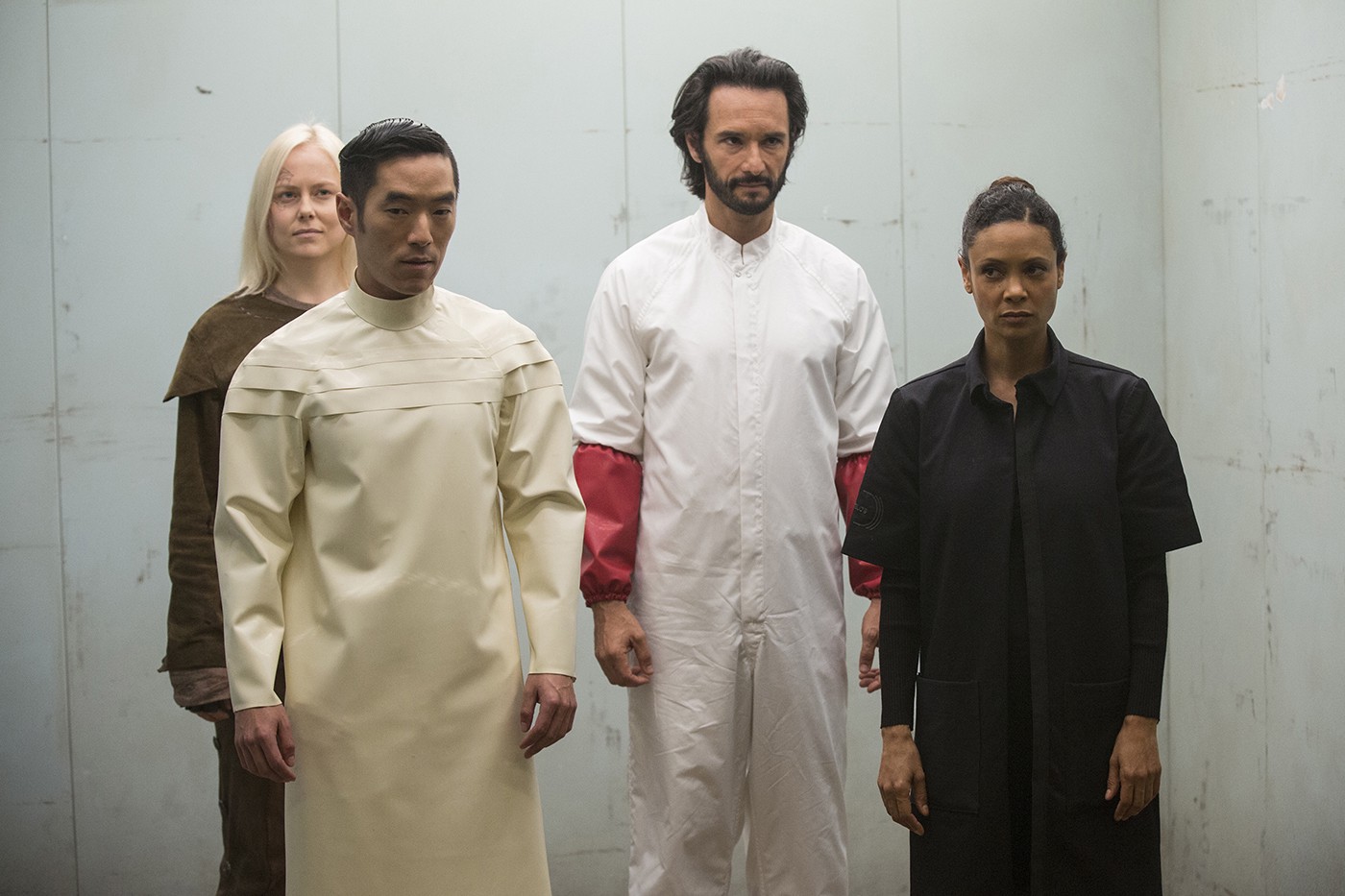 We see Maeve being completely rebuilt with the explosive device removed from her spine. She is now able to leave the park with no repercussions. Maeve takes Felix and Sylvester to find Hector and Armistice (Ingrid Bolsø Berdal) so they can help her break out of the facility. When they find them, Maeve seems undisturbed by (and has no remorse for) the violent deaths Hector and Armistice delivered to the techs who were assigned to them. She continues to threaten Sylvester into compliance, and proceeds to head down to cold storage to see Clementine.

They discover Bernard’s body when they arrive, and Felix is shocked to learn Bernard is a host. Maeve commands Felix to repair him. When he does, Bernard proceeds to tell Maeve that she has broken free of her programming multiple times before, and has been reset each time. She is one of the lucky ones, as most hosts who “awaken” go insane. Maeve asks if he can erase her memories of her daughter, but he tells her that would destroy her. Bernard states, “Your memories are the first step to consciousness. How can you learn from your mistakes if you can’t remember them?”

Maeve wants to know who else has been making changes to her code, and Bernard discovers she has been controlled all along. Her awakening, her desire to reprogram herself, her plan to escape – they were all programmed into her by “Arnold.” We learn later that Dr. Ford (Anthony Hopkins) was behind it all along. Maeve was never fully conscious, never free of her programming. Ford gave her a new narrative – she was only a tool to serve whatever plan he had for her. Maeve refuses to believe this, however, adamant that she is in control of her own life.

Felix guides Maeve through the facility to the train station, as Hector and Armistice fight off the security guards who try to stop them. Before they part, Felix gives Maeve the location of her daughter. Maeve dismisses it, saying that she was never her daughter, no more than Maeve was whoever she had been programmed to be. As Maeve makes her way to the train though, she sees the Westworld promo featuring her previous life again. She boards the train and witnesses a mother hugging her daughter, and she pulls out the information Felix gave her. The struggle is written on her face as she contemplates her decision; ultimately she hurries off the train right before the doors close. 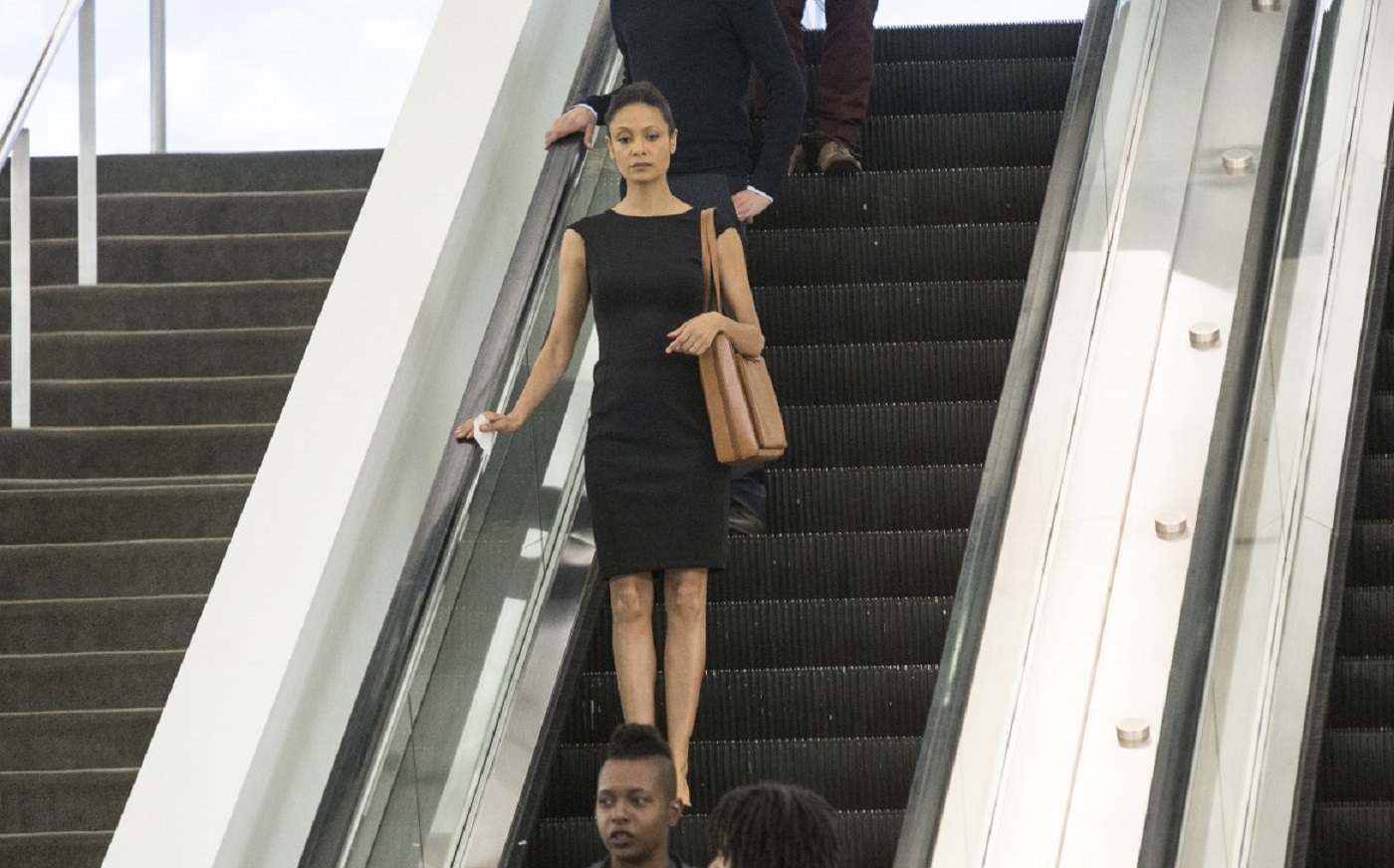 Some believe that Maeve still isn’t in control of her destiny, but it’s very clear that she finally rebels against her programming. Maeve had been intended to escape, as her coding to “Infiltrate Mainland” indicated. Bernard even tried to tell her this before she cut him off and destroyed the tablet. Her decision to stay is a direct violation of that command. The ultimate clue that this is her own decision is in the last speech Ford gives, as his words play over her final scene: “I began to compose a new story… It begins with the birth of a new people. And the choices they will have to make. And the people they will decide to become.” Maeve is now writing her own story, and it has just begun.

Like Dolores, Maeve appears to be fully conscious now. Dolores may be the de facto leader of the host uprising, but Maeve will likely be a key player as well. With her ability to manipulate the other hosts, she could prove a vital weapon against the humans. The question that remains is what does Maeve really want? She will definitely search for her daughter and will want to protect her at any cost. Unfortunately that may mean all out war before the end.