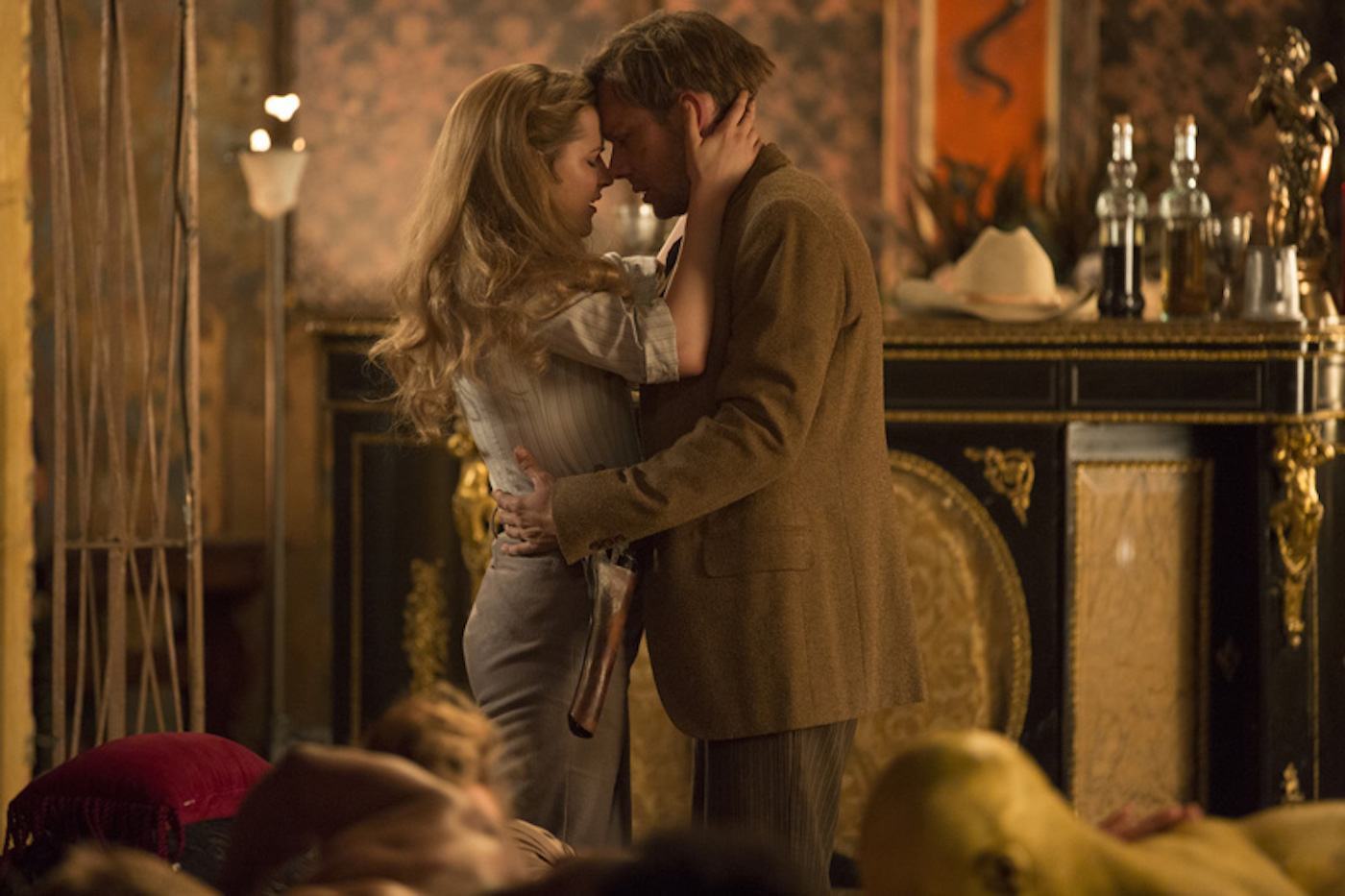 The end of episode 4, “Dissonance Theory”, comes with Maeve’s (Thandie Newton) exclamation that she’s “not crazy”, prompted by the bullet she and Hector (Rodrigo Santoro) find in her abdomen. This revelation is certainly good news for her, as it confirms the suspicions she’s been having about her not-so-Sweet(water) world. However, this awakening moment only serves to cause trouble for the park’s human staff, whose job it is to keep the hosts chained to their loops.

In episode 5, “Contrapasso”, we see the journey towards android consciousness progress even further, particularly with Maeve and Dolores (Evan Rachel Wood). For Maeve, her newfound confidence provides her with a clear perspective, whereas with Dolores, we see her continuously struggle to make sense of the inner monologue and frequent flashbacks, both of which seem to be growing stronger within her.

We also see a considerable progression in William (Jimmi Simpson) and Logan’s (Ben Barnes) storyline. The friend/work colleague duo descend upon the town of Pariah, and proceed to indulge in desires both sexual and violent in nature. It is here they finally meet El Lazo (Clifton Collins Jr.), who tasks them with stealing a wagon full of nitroglycerin, and then proceeds to reward them with a night in Pariah’s lavish brothel. William also further solidifies his relationship with Dolores, acting as an anchor for the host as she experiences an increasing number of troubling flashbacks.

A small but important scene in the episode also comes courtesy of Elsie (Shannon Woodward). After blackmailing a Delos tech (Christopher Gerse) into letting her examine the Woodcutter (Tait Fletcher), Elsie discovers a laser-based satellite in the decommissioned host’s arm. She brings this to Bernard’s (Jeffrey Wright) attention, claiming it’s being used to smuggle data out of the park. 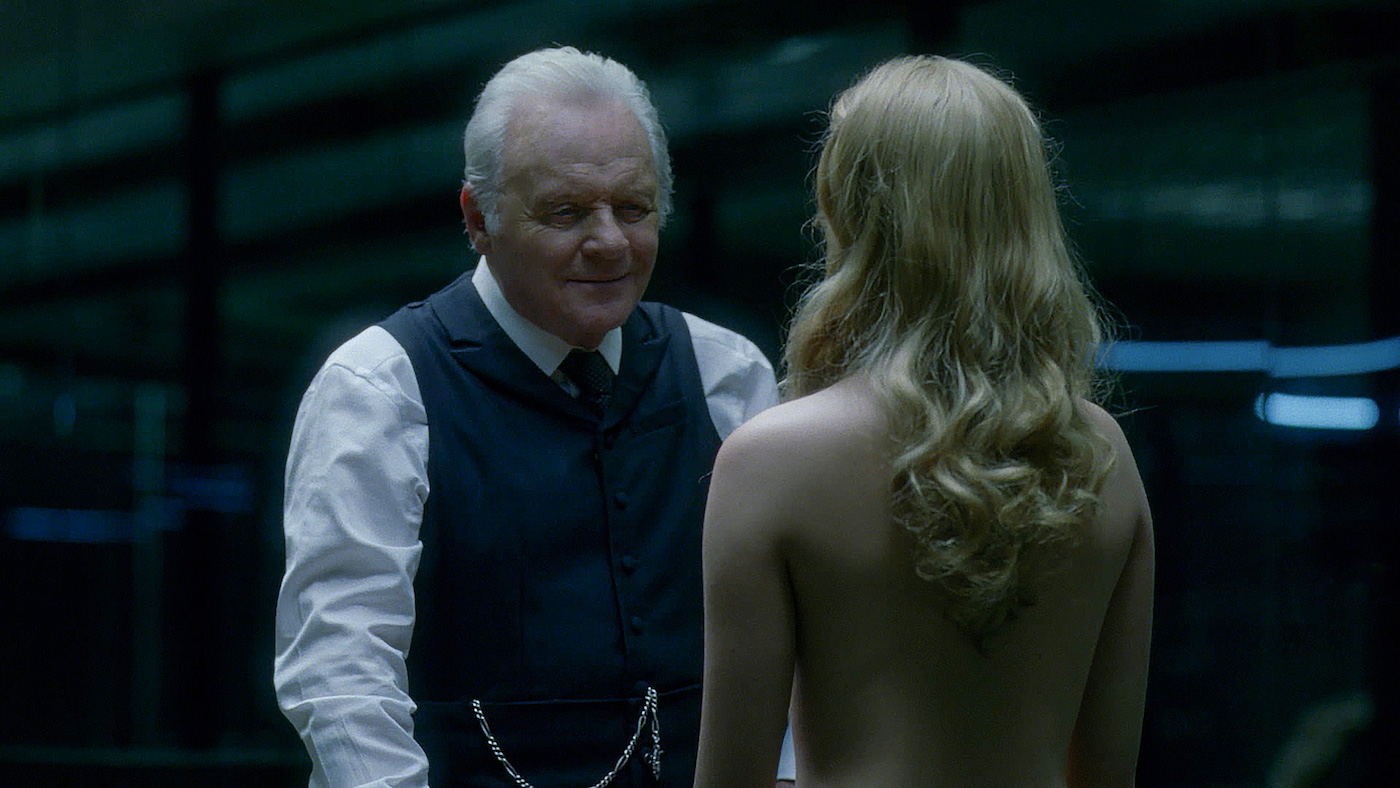 The conversation Ford has with Old Bill at the beginning of the episode is less of a two-way dialogue, and more a chance for Ford to tell the story of a greyhound he and his brother had growing up. The first time around, I figured this story had some greater significance, but I couldn’t quite figure out why. However, with my full-season knowledge, it becomes apparent that this story serves as a foreshadowing of what’s to come.

Ford begins the story by telling Old Bill that their greyhound was a racing dog, and would chase around a felt rabbit as a way of exercising. One day, Ford and his brother decide to take the dog to the park. I’ll let Ford pick it up from here:

“Our dad had warned us how fast that dog was, but we couldn’t resist. So my brother took off the leash, and in that instant, the dog spotted a cat. I imagine it must have looked just like that piece of felt. He ran – never saw a thing as beautiful as that old dog running. Until at last he finally caught it, and to the horror of everyone, he killed that little cat. Tore it to pieces. Then he just sat there, confused. That dog had spent its whole life trying to catch that thing. Now it had no idea what to do.”

Now, if you replace the dog with a host like Dolores or Maeve, this story sounds quiet similar to the trajectory of Ford’s final narrative. The hosts chase something they want (consciousness), and when they finally get it, chaos ensues, until the hosts realize they don’t know what to do next. In later episodes we see Dolores and Maeve ‘catch’ what they’ve been chasing after, and both proceed to cause mayhem by shooting every last human in sight. Now, the question is, what will they do next? Have they planned that far ahead?

Ford’s second conversation in the episode is with him and Dolores. Not only does this conversation provide one of the most impactful lines from the season one trailer (“I wouldn’t say friends, Dolores. I wouldn’t say that at all.”), but it also clues us into the fact that Ford knows full well what Arnold (Jeffrey Wright) was doing with Dolores before he died.

Ford starts by lecturing Dolores on the true meaning of dreams, claiming, “they’re the stories we tell ourselves of what we could be, who we could become.” The conversation then turns to Arnold. After Dolores fails to recall her perished creator, Ford responds with:

“Somewhere under all those updates [Arnold] is still there, perfectly preserved. Your mind is a walled garden – even death cannot touch the flowers blooming there. Have you been hearing voices? Has Arnold been speaking to you again?”

One of the most profound parts of this conversation comes at the very end, as Ford is leaving the room. Once he’s out of sight, Dolores mutters to herself, “He doesn’t know. I didn’t tell him anything.” It’s safe to assume Dolores is probably talking to her inner-Arnold dialogue. The question is, does she consciously make the choice to lie to Ford about her not hearing Arnold’s voice, or is this something Ford has programmed into her? Judging by Ford’s reaction after Dolores denies she’s been hearing the inner voice (he becomes angry and squeezes her arm), perhaps her response is actually a non-programmed lie. 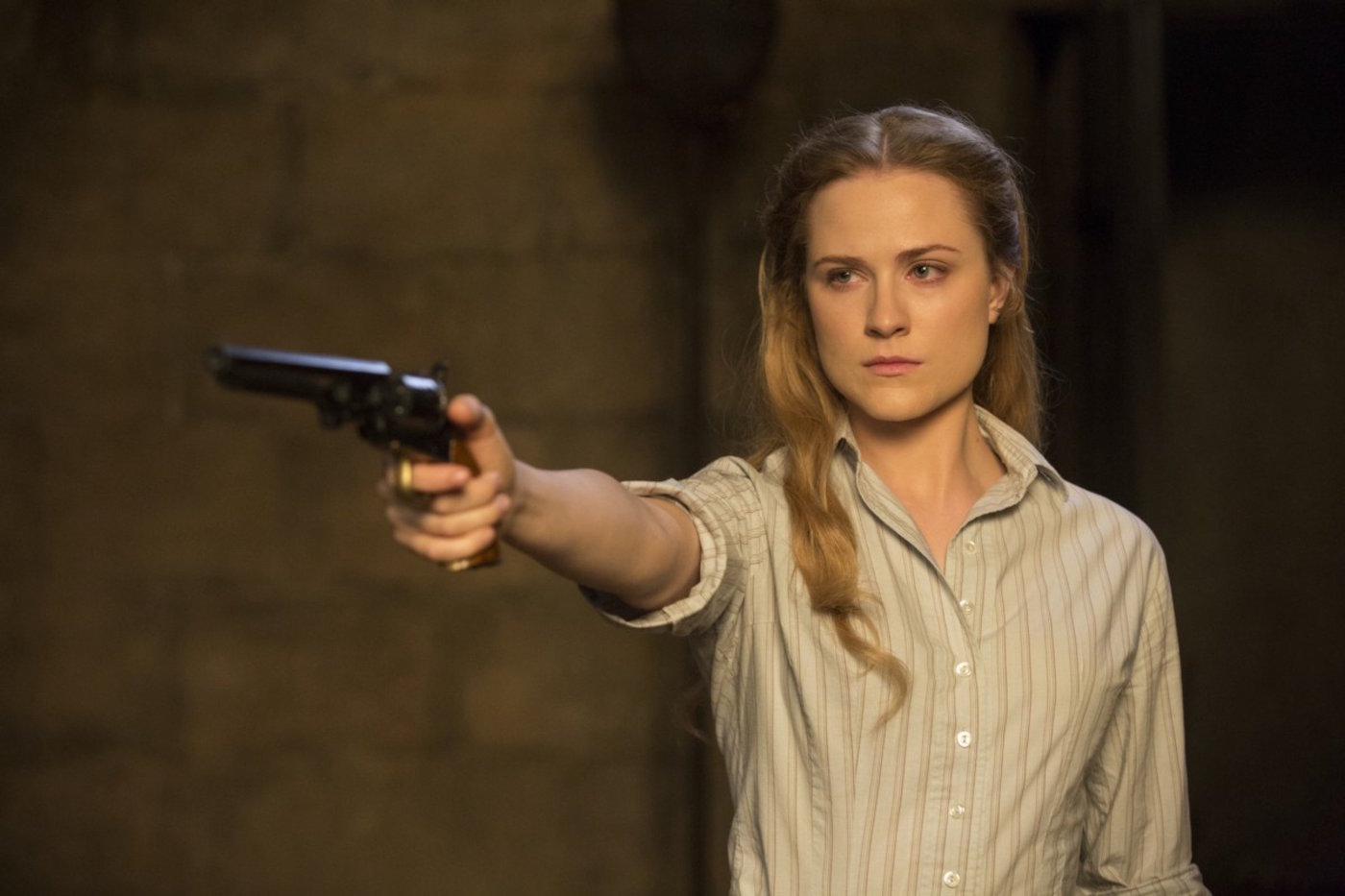 Dolores’s flashbacks throughout this episode play a prominent role, and become much more frequent than what we’ve witnessed up to this point. One of the first flashbacks she experiences occurs when she, William, and Logan first arrive at Pariah. As they’re walking through the streets, Dolores spots a dead man in an upright coffin. This sight causes a sudden flashback to a town littered with dead hosts, before we quickly see a shot of Dolores standing in the street among the dead. Given what we know about the rest of the season, there’s very little doubt that this flashback is a foreshadowing of the host massacre we’ll soon see Dolores go on after she kills Arnold.

Later on that evening, Dolores seems to experience a hallucination. As she watches a parade of the townspeople marching and chanting through the streets, she seems to spot herself walking among them. Surprised, she attempts to enter the parade and catch up to herself, but the crowd is too large and ultimately blocks her way. Could she have been looking at her alter ego, the notorious Wyatt?

Well, a scene towards the end of the episode may suggest the answer to that question could be yes. After the Confederados learn that the nitroglycerin bottles they handsomely paid for are actually filled with tequila, they corner Dolores and William. A couple men start attacking William, which prompts Dolores to seemingly take on a completely different persona. In an instant, her look changes from distressed damsel to angry killer, and she proceeds to effortlessly shoot and kill three of the Confederados with pinpoint accuracy. Given how unsteady we’ve seen Dolores with a gun in previous episodes, it’s hard to believe that her actions to save William aren’t the result of Wyatt’s code taking hold of her. 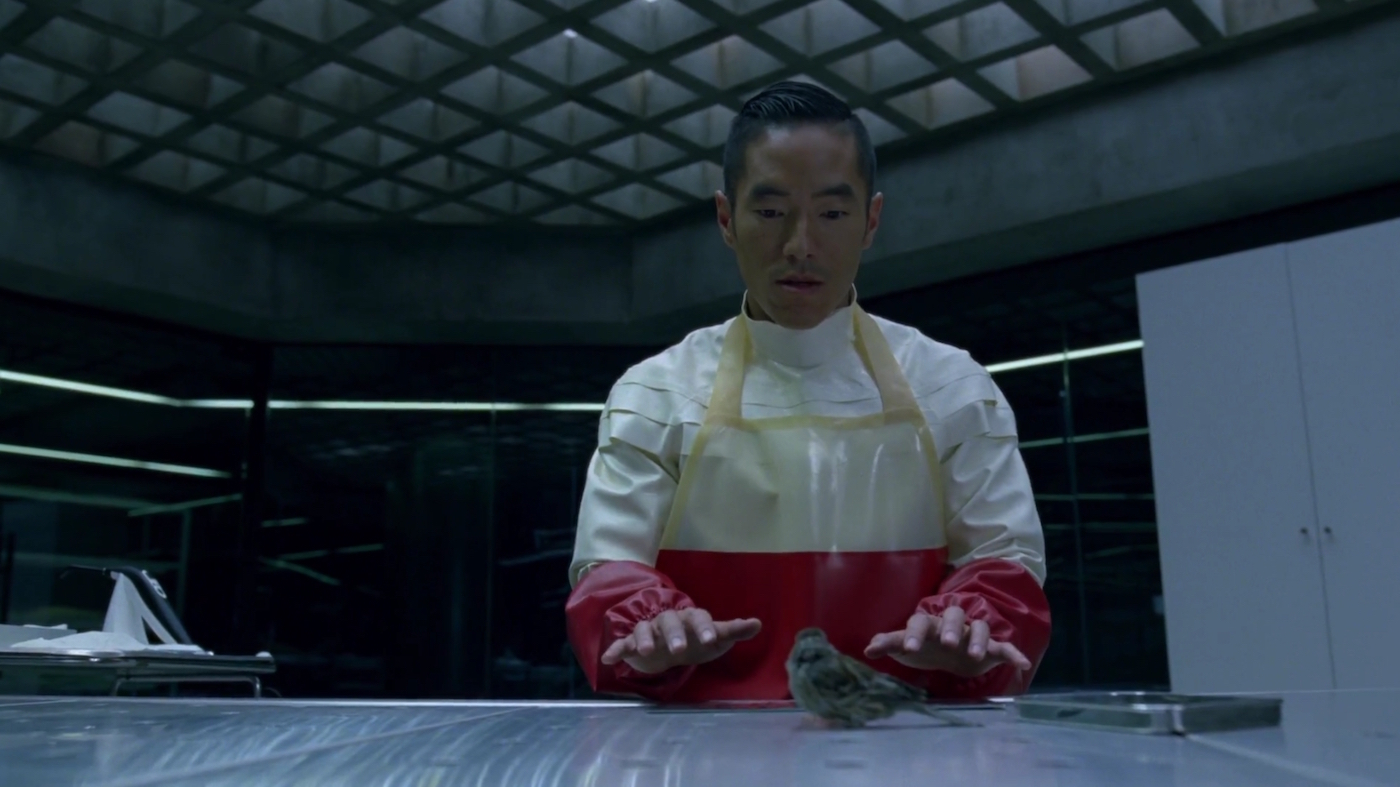 Up to this point, we know very little about Felix (Leonardo Nam), but this episode reveals some of the anxious tech’s desires.

Early in the episode when Felix and Sylvester (Ptolemy Slocum) take a break from patching up Maeve after her self-inflicted stab wound, Felix opens up a locker, where we see what looks to be an inactive robotic bird.

Later in the episode, when Felix has some alone time, he takes out the bird, along with a Behavior tablet, and begins typing away at the tablet in an attempt to power up the bird. The bird does come to life, but quickly malfunctions and drops to the floor, just as Sylvester returns to their operating room. Sylvester chews out Felix, telling him it’s not okay for him to steal a robotic bird and a tablet. But Felix fails to see this as an issue, revealing to Sylvester that he’s practicing code writing.

This is an important scene, not only because we discover Felix’s desire to learn coding, but because we also bear witness to the fact that Felix is completely fine with breaking Delos’s rules. This lack of respect for management’s rules and regulations will certainly present itself in a more apparent manner once Felix assumes the role of co-conspirator in Maeve’s plan.

Speaking of this duo, the last scene of the episode finds Felix again practicing coding on the robotic bird, while Maeve’s body lies lifeless on a gurney in a corner of the operating room. This time, Felix successfully gets the bird to start flying around the room. He is in awe of this accomplishment, watching the bird fly around in circles, until it suddenly lands on Maeve’s finger. The host has managed to wake herself up, and as a baffled Felix stares in disbelief at her, she says with a smirk on her face, “Hello Felix. It’s time you and I had a chat.”

What do you think of “Contrapasso” after watching it again? Did you catch anything the second time that we didn’t discuss above? Let us know!