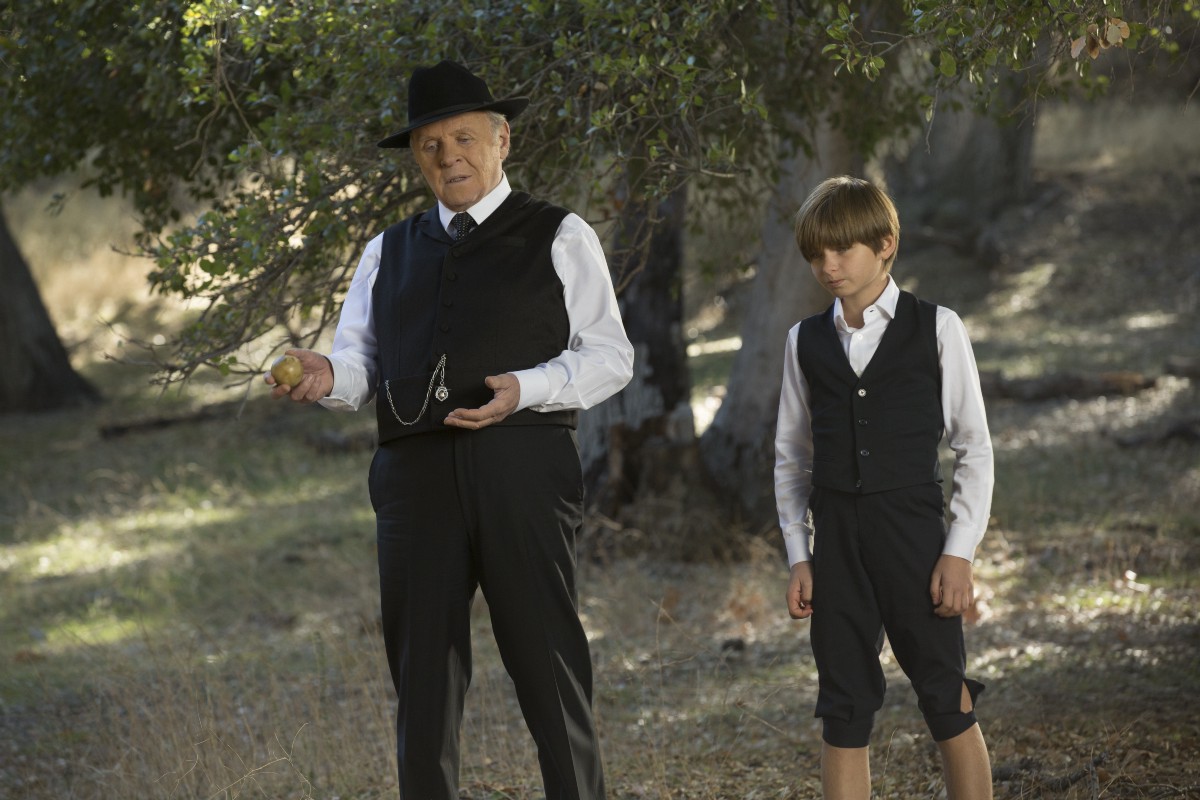 At the end of episode 5, “Contrapasso,” Maeve (Thandie Newton) shocks Felix (Leonardo Nam) by waking up – again! – and telling him they need to chat. In episode 6, “The Adversary,” Maeve goes beyond just talking and begins to take matters into her own hands, dragging Felix and Sylvester (Ptolemy Slocum) along for the ride. 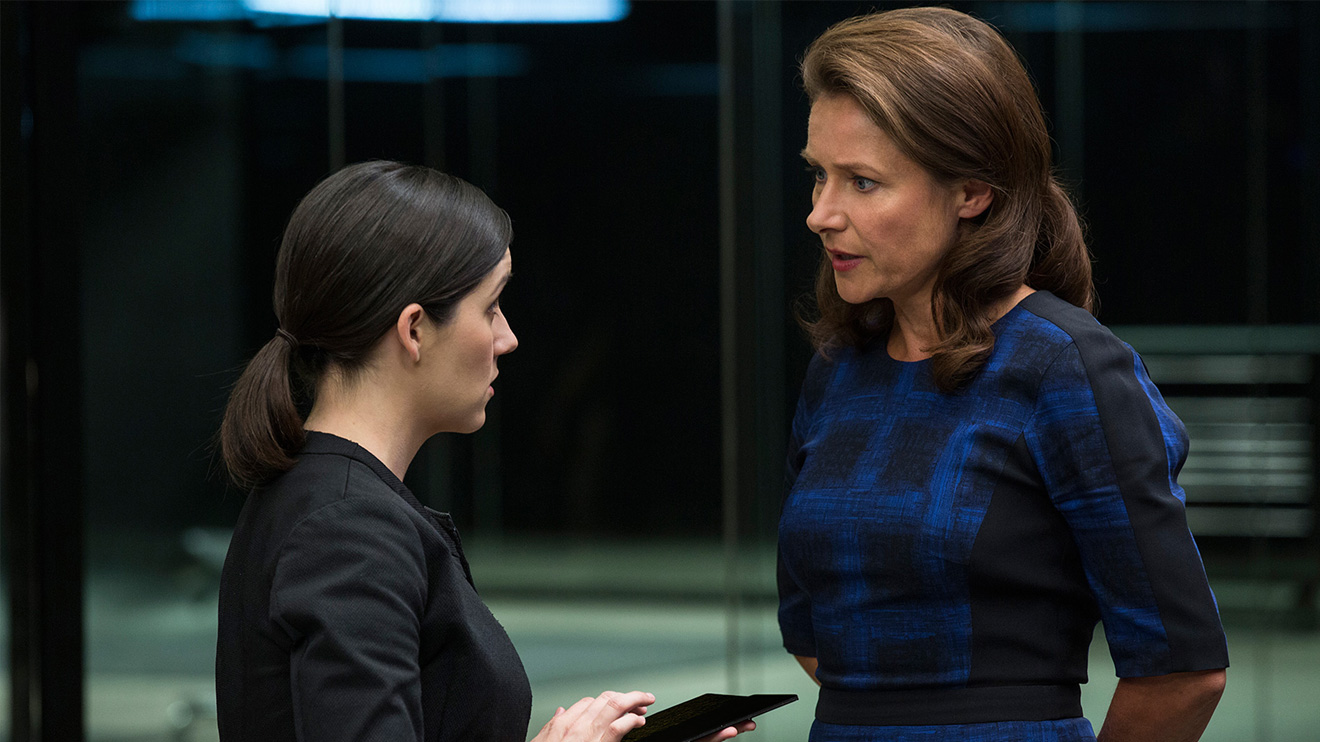 Speaking of Theresa, she decides to end her affair with Bernard now that Ford knows about their relationship. She tells Bernard the board will question her objectivity since their departments are supposed to “keep each other in check” and believes that Bernard’s loyalty will always be to his team and to Ford (more than you know, Theresa). Given that Theresa is working with the board to oust Ford and that Bernard may get caught in the crossfire, it seems she is cutting her ties with him now to spare her own feelings later.

Later, she tries to enlist Lee Sizemore’s (Simon Quarterman) help in fixing the continuity issues Ford’s new narrative has created. Theresa implies the board may replace Ford before long, although it’s unclear whether she would actually give Sizemore that opportunity or if it’s simply a way to motivate him. Sizemore would rather get drunk however, and he ends up humiliating himself by hitting on the Executive Director of the Delos board – Charlotte Hale – and engaging in a public temper tantrum/literal pissing contest in the park control room. 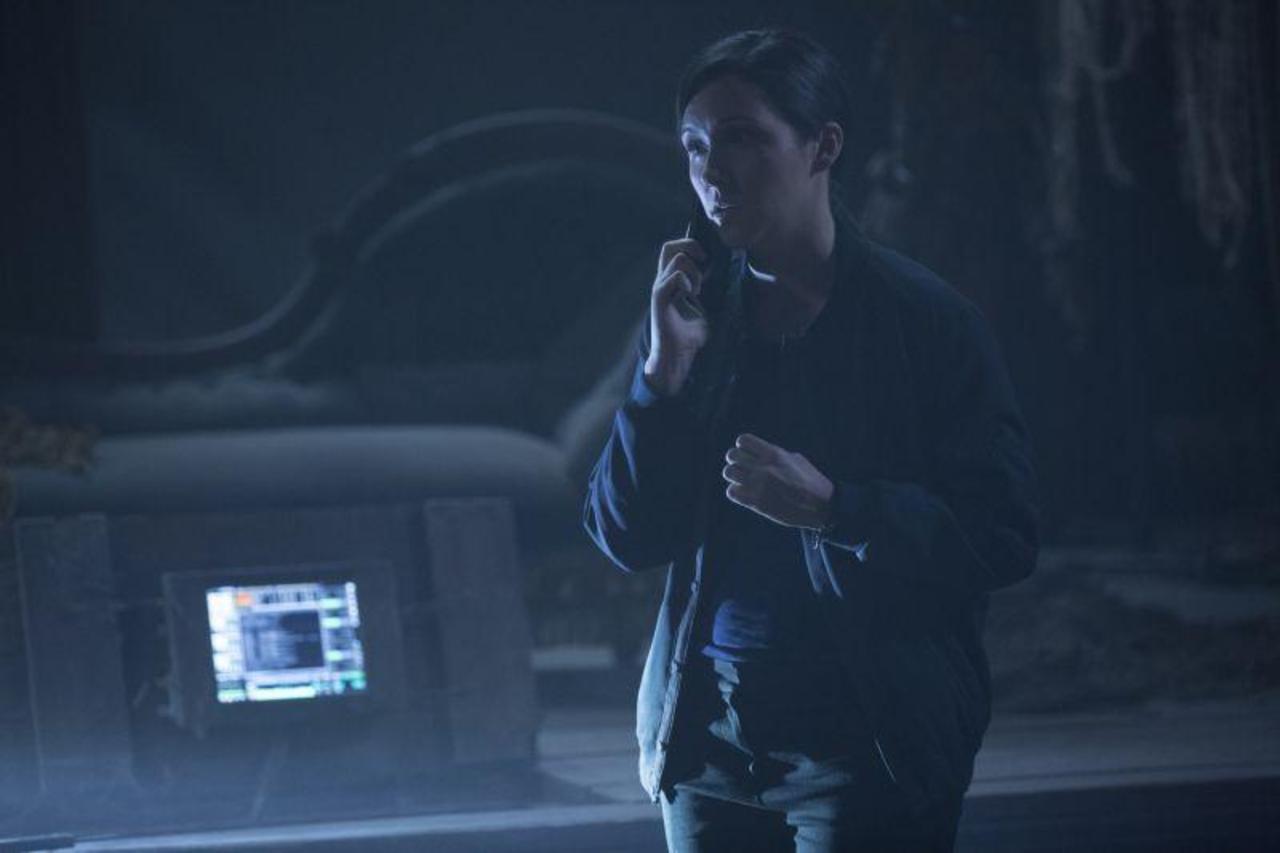 Elsie reveals her discovery about the satellite link to Bernard. She confesses that she initially thought he might be the one behind it, but since he’s “been there forever” (hint, hint) he would have tried something like this a long time ago. Elsie says she can find out who the host was transmitting to if she could pinpoint the exact time he went up to the ridge.

Bernard responds that he can access the legacy geo positioning system that the oldest hosts originally used. As he does so, we get a nice Easter egg of the Gunslinger from the original Westworld film, and another clue to the two timelines as the logo on the ancient computer matches the one from William’s (Jimmi Simpson) arrival in episode two. Bernard sends the information on the stray host to Elsie before discovering 5 anomalies – hosts which aren’t registered in the new system.

Bernard goes to investigate the “off limits” sector where the unregistered hosts are located, finding Ford’s host family. We get another clue about Ford’s mysterious partner when Bernard incorrectly believes Ford’s host father is Arnold. He is the man in the photo of Arnold that Ford showed Bernard back in episode three, but of course Bernard’s programming wouldn’t allow him to see the real Arnold (his doppelganger).

The father attacks Bernard and won’t respond to his commands. Ford appears out of nowhere (what door?) and stops the assault. He explains that these hosts only respond to his voice; they are first generation models that Arnold built himself. Ford assures Bernard they are harmless and can only go where he allows, but Bernard’s concern remains. Later, Bernard gets a call from Elsie who reveals that the data was transmitted to a Delos satellite. The stray host was hacked using the old bicameral relay system, and someone has also been using it to communicate to other first generation hosts (hence the “voices” they’ve been hearing). Elsie heads to the creepy abandoned theater (where nothing could possibly go wrong!) to investigate the source of the broadcast.

As Bernard visits Theresa to share concerns about the park anomalies and Ford himself (on Ford’s command), Elsie calls to reveal Theresa as the culprit behind the data leak. Theresa isn’t the only one tampering with hosts, however. Elsie explains someone else has been modifying the older models – altering loops and changing prime directives – allowing them to lie or possibly hurt guests. Most shocking of all, Arnold appears to be the one behind it (or rather Ford using Arnold’s credentials). Elsie is later grabbed by unknown assailant, who will later be revealed as Bernard, again acting on Ford’s orders. 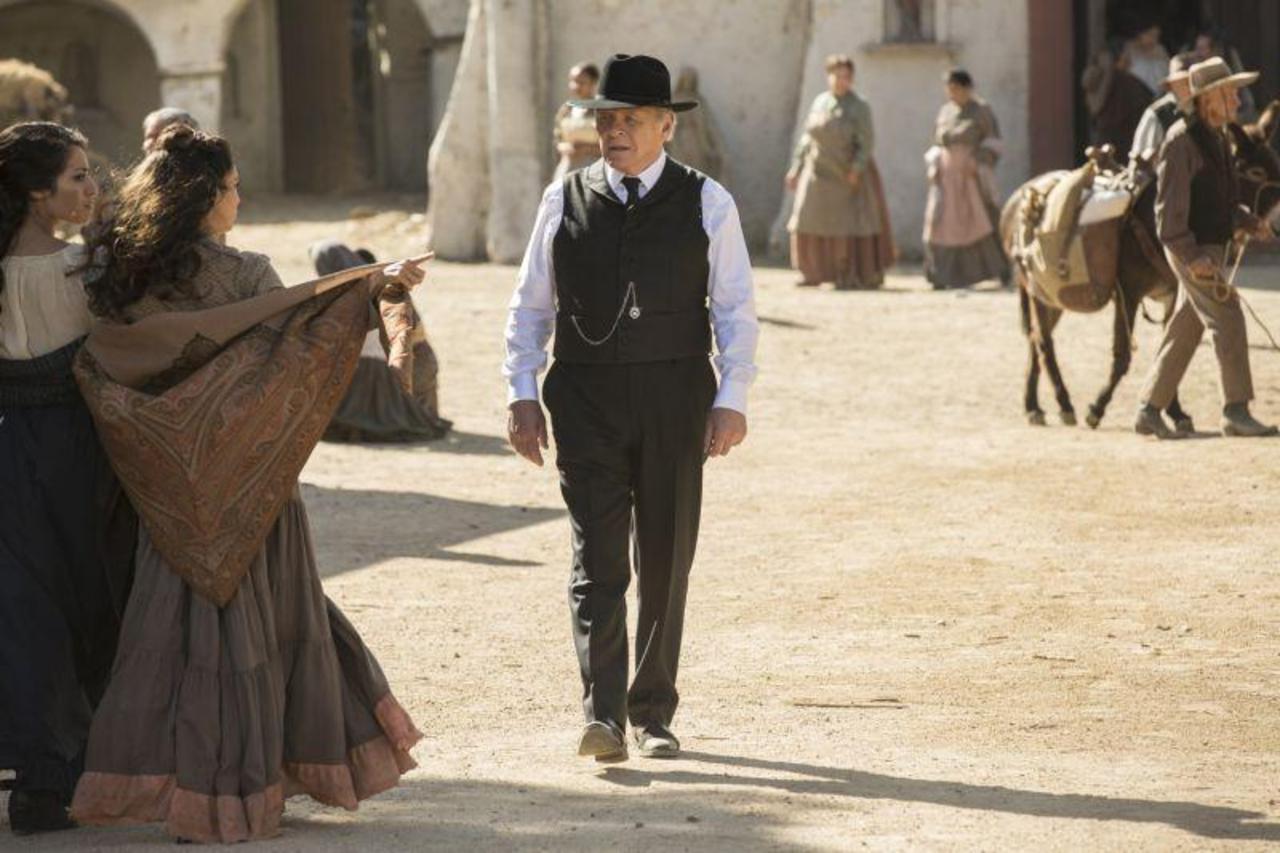 Walking through Las Mudas, Ford spies a Maze carving on a table; later in his office, he pulls out a notebook containing old diagrams and turns to a drawing of the Maze. We know Ford has orchestrated the hosts’ “awakening,” but it’s unclear if he has programmed them to create Maze imagery or if they are doing it on their own. We can also see a model of Escalante on the table – complete with a line of hosts converging on the town. Spoiler alert!

Later, Ford encounters his young robotic self out in the park, who shows him the unmoving body of young Ford’s dog Jock, lying in a pool of blood. When Ford proceeds to question the boy, he lies to Ford saying he found the dog that way. When pressed for the truth, the boy admits he killed the dog because it killed a rabbit, and Arnold told him to put it out of its misery. Arnold said the dog was a killer and couldn’t help how it was made, and if it were dead it couldn’t hurt anything anymore. Was this something Ford purposely caused, or an unfortunate side effect of his modifications?

Teddy and the Man in Black 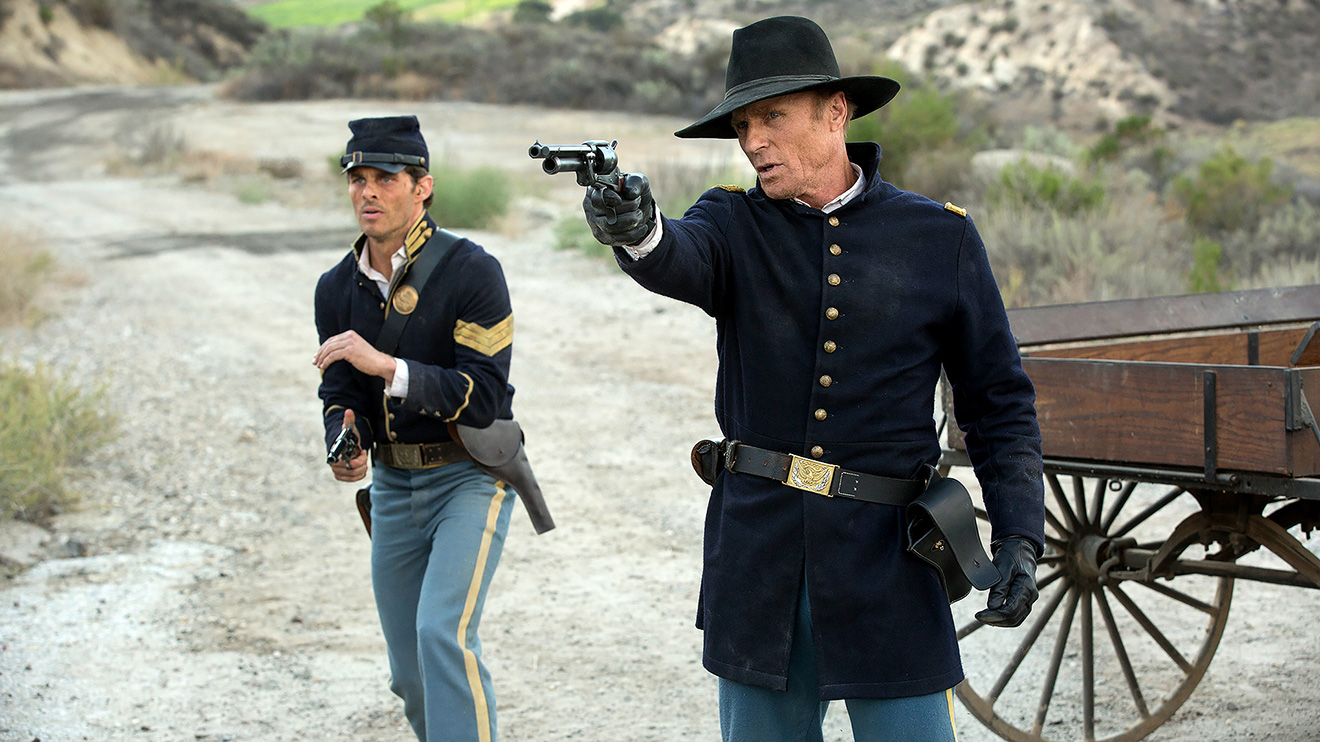 We get some more information on the Maze, as the Man in Black asks Teddy if the Maze image on the scalp means anything to him. Teddy replies that the Maze is an old native myth; it’s “the sum of a man’s life, the choices he makes, dreams he hangs on to. And there at the center, there’s a legendary man who had been killed over and over again countless times, but always clawed his way back to life. The man returned for the last time and vanquished all his oppressors in a tireless fury. He built a house. Around that house, he built a maze so complicated, only he could navigate through it. I reckon he’d seen enough of fighting.”

Now we know this response was programmed by Ford, so is it meant to make the Man in Black think the legendary man is Arnold? That he has found a way to cheat death? Of course, since the Maze is really the path to consciousness, you could say it really is “the sum of a man’s life, the choices he makes, dreams he hangs on to.” The hidden meaning could be that the “man” is Dolores, who always claws her way “back to life” and is poised to vanquish her oppressors.

Forced to find another way past the border due to trouble in Pariah, Teddy and the Man in Black happen upon a military encampment. They accost 2 soldiers returning to camp and steal their uniforms. Unfortunately, Teddy is recognized and captured for his role in helping “Wyatt” massacre their fellow soldiers in Escalante.

As Teddy is about to be branded with – what else? – a Maze, he has a flashback of Escalante. He sees Wyatt shooting up the town and remembers his role in the murders. The memory is very close to the truth, since Dolores/Wyatt did force Teddy to help her kill all the hosts in Escalante. Teddy then gets loose and attacks their captors, finally making his way to a Gatling gun and taking out the entire camp, much to the Man in Black’s surprise. 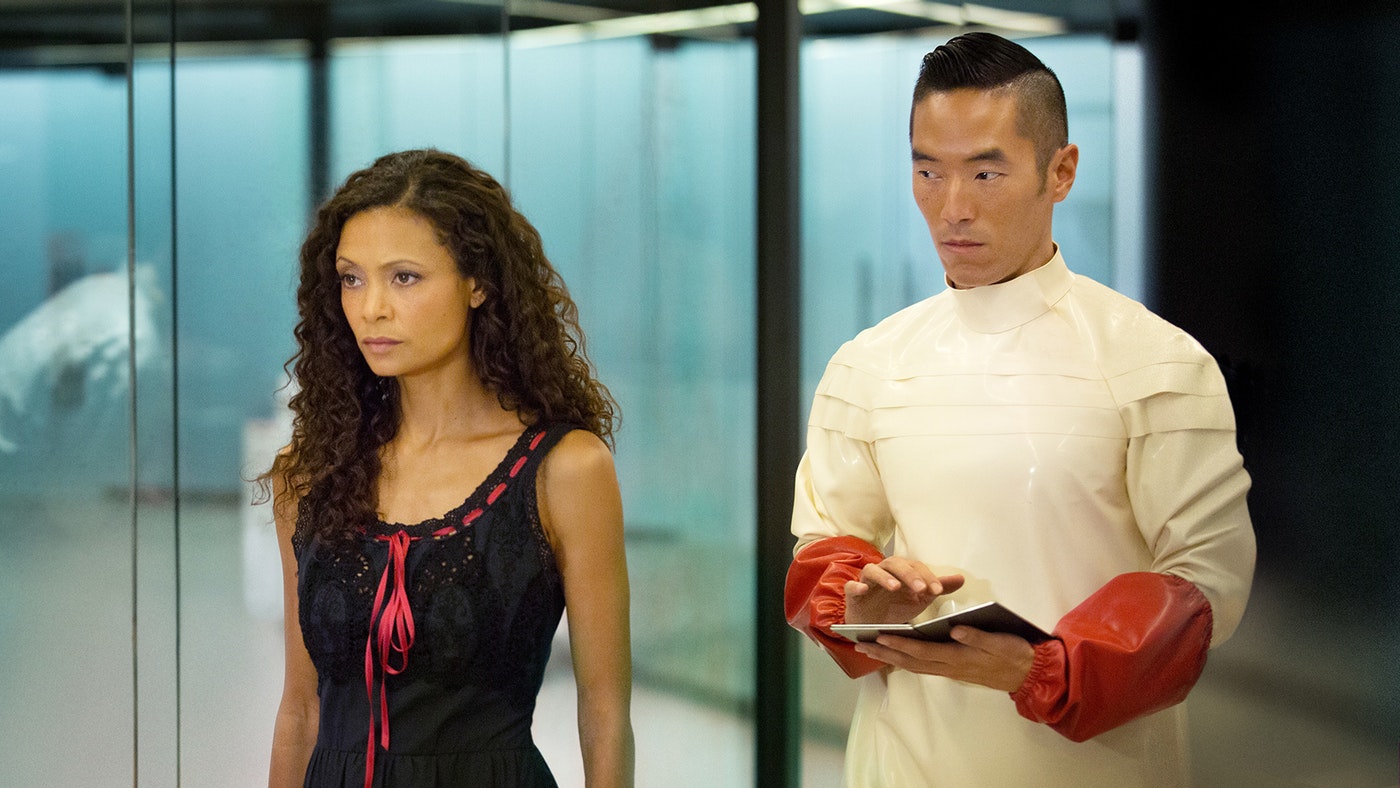 Maeve is back to her regular routine after her conversation with Felix in the previous episode. She spies a rather dangerous looking newcomer and leads him upstairs. Maeve insults him, mocks his manhood, and goads him into choking her to death. She then wakes up in the lab with Felix and asks, “Now then, where were we?” Felix explains the nature of Maeve’s existence as a host and how her every thought and action is programmed and controlled. She doesn’t believe it until he shows her his tablet, revealing that everything she says is scripted.

This causes her to glitch and shut down, but Felix is able to bring her back online. She then tells him to take her upstairs to tour the rest of the facility. In one of the most powerful and moving scenes of the series, we see Maeve’s awe and despair as she sees “dead” hosts being cleaned and repaired, and hosts being manufactured, programmed, and tested. The biggest shock, however, is a Westworld promo featuring Maeve with her daughter in her past role.

She asks Felix how they had her dreams on the screen; he explains about her previous build and that those memories should be erased. Sylvester walks in and – fed up with Felix’s obsession with Maeve – threatens to turn him in to QA. Maeve grabs a scalpel and holds it to Sylvester’s throat, warning him he can either help her, or she can gut him. He relents and the two techs proceed to make changes to her code.

As they begin, they notice someone with far more privileges (Ford of course) has already done some modifications. Sylvester wants out, but Maeve threatens to expose his side business of “tampering” with the hosts for the benefit of lonely techs (eww). She then has them raise her “bulk apperception” all the way to the top. Now that we know this entire plot was scripted for her by Ford, why did he believe the techs would help her instead of reporting her? Perhaps he just kept trying until the right people came along? Of course, Ford claims to know everything about his employees, so perhaps he realized his gamble would pay off all along.

Did you notice anything new? Sound off in the comments!