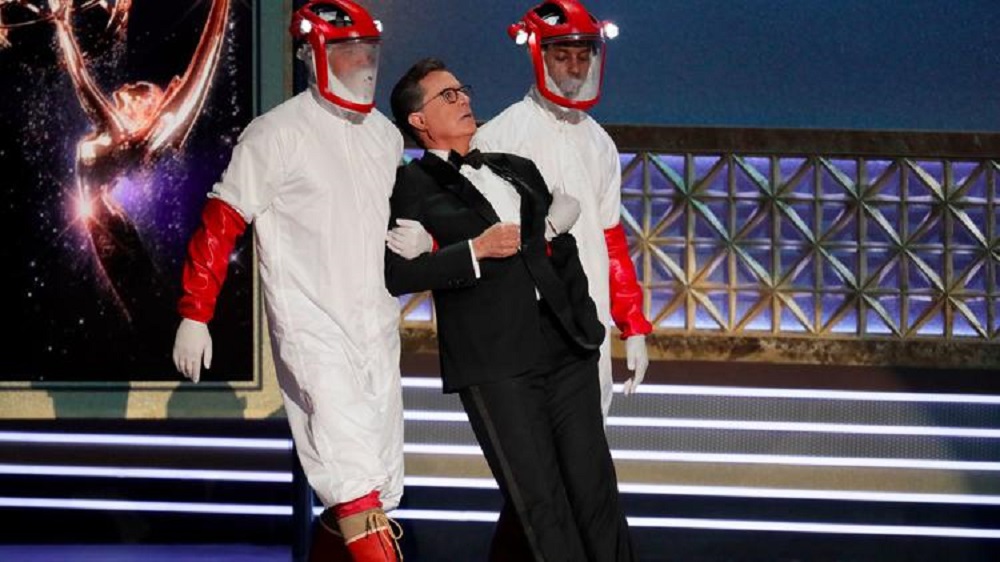 Westworld may have gone home empty-handed at the Emmy Awards last night, but it wasn’t all disappointment for fans of the show. Showrunners Lisa Joy and Jonathan Nolan discussed Joy’s directorial debut while walking the red carpet last night, while star Evan Rachel Wood (Dolores Abernathy) hints at a shocking second season. Emmy host Stephen Colbert got in on the Westworld fun as well, performing a skit with Jeffrey Wright‘s character, Bernard Lowe. Check out all three clips below the cut!

TV Line spoke with Lisa Joy about her taking the helm on Westworld for the first time. She is directing episode four of the new season, and she described the experience being like “somebody handed me a Ferrari and said, ‘Try driving it — don’t crash.’” Jonathan Nolan chimed in saying, “You’ve made it far more violent and disturbing than we ever intended. It was quite a placid episode, and Lisa has kind of turned it into a bloodbath.”

Meanwhile, Evan Rachel Wood teased season two in an interview with Entertainment Tonight. The cast and crew have been hard at work, aiming to deliver an even better show next year. “I shot until 3 in the morning a couple nights ago, so I’m still sort of in a dream space,” she admitted. “But it is twice as ambitious as the first season.” Wood adds, “I didn’t think the show could shock me and it continues to do so,” she explained. “It’s going to be everything and more.”

Finally, Stephen Colbert appears to succumb to the pressures of being an Emmy “host” and is whisked offstage for a hysterical analysis session with Bernard. Watch the entire sketch below!

2 responses to “Westworld at the Emmys: Red Carpet Interviews and Hilarious Sketch with “Host” Stephen Colbert!”