The secrecy surrounding Westworld is infamous, with showrunners Jonathan Nolan and Lisa Joy keeping a tight lid on what information is revealed prior to season two. Thankfully, that lid is starting to loosen as the April 22nd premiere date approaches! In the latest cover story from Entertainment Weekly, Nolan, Joy, and several cast members reveal what we can expect from the upcoming season.

As expected, season two will focus on the host uprising and the aftermath – as well as answering a few lingering questions. “We don’t like to endlessly build mystery; we like to settle our debts by the end of the season. We want to feel like the show is rocketing ahead,” Nolan says.

One question that won’t need answering is whether Dolores (Evan Rachel Wood) actually killed Dr. Robert Ford (Anthony Hopkins), and not a host replica as some fans had speculated. According to the showrunners, Dr. Ford is truly dead. We will see flashbacks of Ford’s younger days, however – as well as more of young William’s (Jimmi Simpson) backstory and the introduction of Delos founder (and possibly William’s father-in-law?), James Delos.

What’s in store for Dolores? According to Wood, “She’s playing the chess master. She has access to all of her memories, but now she’s in control. There are some scenes where she’s three different people in the span of a minute.” Wood’s co-star James Marsden adds that his character, Teddy Flood, will try and restrain some of Dolores’ darker impulses though. “Dolores is further along in her advancement, and he’s trying to catch up and make sure the manner in which we proceed still feels like the good parts of Teddy that he remembers.”

Joy agrees that there will be internal conflict as the hosts try to find their path forward. “Not everybody in the revolution is on the same page.” With Delos sending reinforcements, however, will the hosts pull out all the stops to destroy them? “The leashes are off,” Joy explains, “but the question is: How far are you willing to go until you become a reflection of the evil you’re trying to fight?”

Will Maeve (Thandie Newton) be at the forefront of the rebellion as well? Newton won’t confirm exactly what role Maeve will play, but does admit, “I was kind of freaked out at first because I had no idea where my character was going this season.” Not to worry – she says it will make sense within the context of the story. “It’s not contrived, though, it’s genuine to what they have mapped out.” 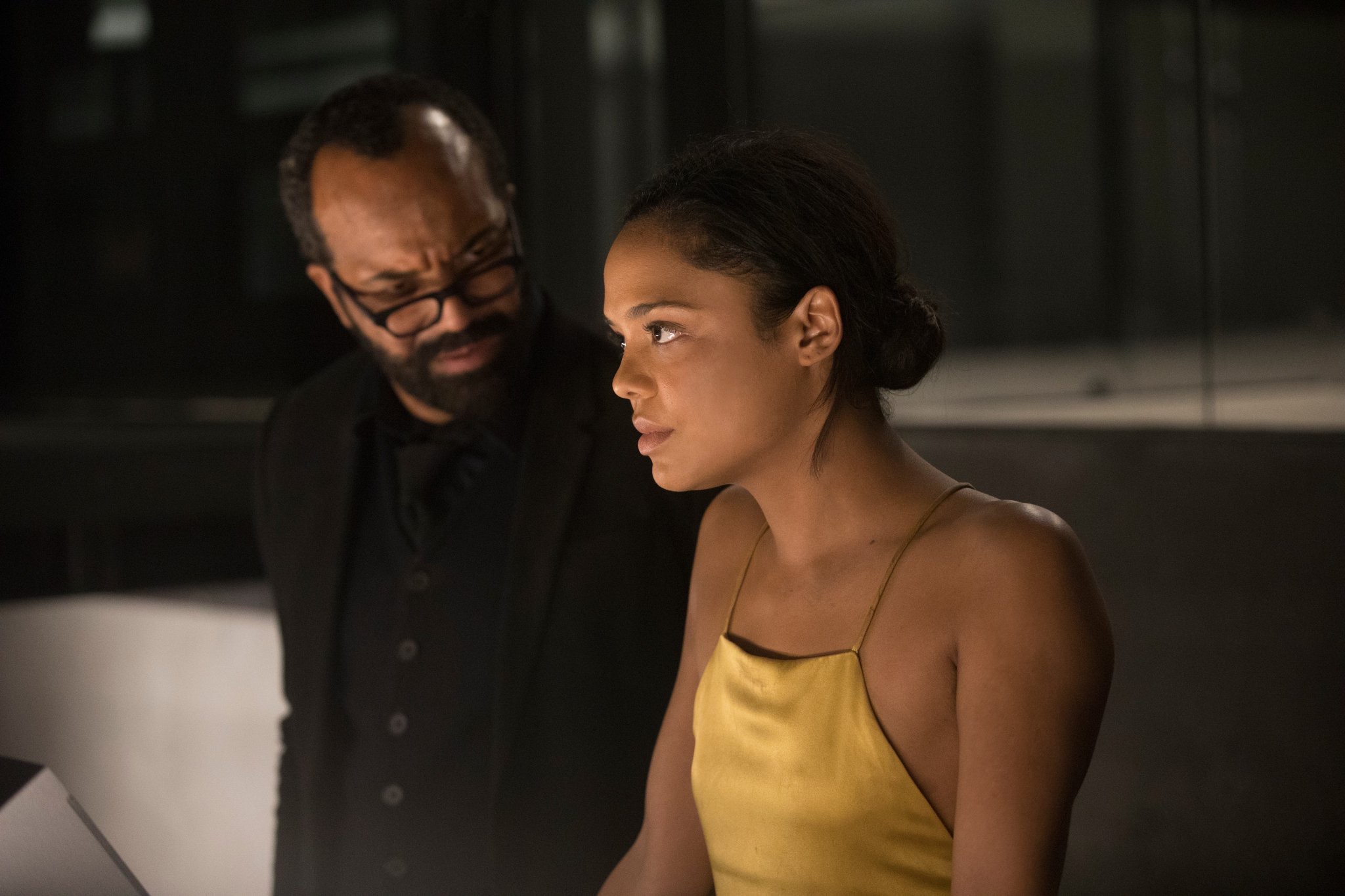 As for Bernard – who just recently discovered he is a host – he will spend this season trying to discover Delos’ secrets (such as the “drone hosts” seen in the trailer), which could lead to some dangerous situations. “He’s trying to do a high-wire act on a razor blade with the humans on one side and the hosts on the other, and he’s perched dangerously in the middle,” according to actor Jeffrey Wright.

Ed Harris is much less forthcoming about William’s agenda, formerly known as the Man in Black. “He gets a bit of damage done to him, that’s for sure” is all Harris will say of William’s adventures in the park, now that the hosts are free to fight back. He does confess, however, that “it’s a pretty trippy second year…Hopefully somebody can explain it all to me after it airs. But it’s going to be tremendously watchable.”

Nolan reiterates that the upcoming season – indeed the series as a whole – travels beyond the limits of Westworld. “This year is much more of a road show – Sweetwater isn’t home anymore.” We could see not only different locations, but different moments in time as well. “These hosts don’t live on the same time frame we do and don’t have the four-year life span of replicants [like in Blade Runner],” Nolan says. “If left to their own devices, they could live forever. So our story has some real scope to it.”