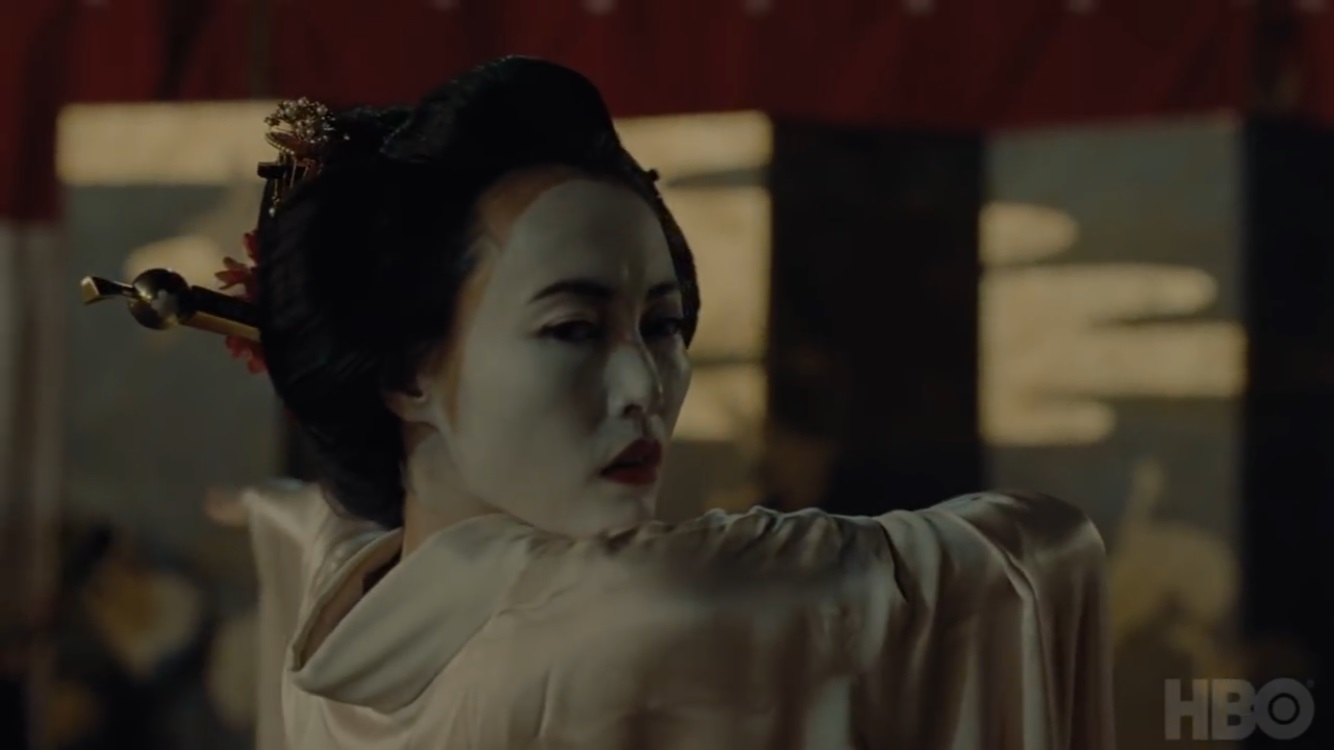 Even though we’re only 22 days away from the season 2 premiere, we’ve just learned about another important casting for Westworld‘s upcoming season!

According to EW, Oscar nominee Rinko Kikuchi has been cast to play Akane, who, from the trailer, appears to be a geisha. Not much else is known about the character, but given the Japanese actress’s resume, it’s safe to assume that her role within Shogun World (and perhaps beyond?) will be a big one.

Kikuchi’s other recent credits include Pacific Rim, Babel (her Oscar-nominated role), and 47 Ronin.

Since the newest Westworld trailer dropped a couple days ago, I’ve had Nirvana’s song Heart-Shaped Box stuck in my head. Of course, the song itself is legendary within the realm of grunge. But, I must say I have to attribute my current mental state to the show’s brilliant composer, Ramin Djawadi, who created a beautiful orchestral rendition of the classic for the trailer.

Rolling Stone chatted with Djawadi after the trailer dropped, during which the composer discussed his thought process behind turning a 90’s alt rock classic into a masterful ballad.

Djawadi noted that he leaned on season one’s reimagined songs (which he himself created) as inspiration for his latest hit:

“It’s an epic song that deserves an epic treatment. I knew I had to do something completely different, so I stay away from the guitars and all that, because I thought, ‘That’s Nirvana,’ so I thought, ‘What is our Westworld version of that?’ And so I had to find my way of making it epic. To play these notes and these melodies with the harmonies of the chorus and everything, to just put that on a big orchestral setting, was pretty remarkable.”

Remarkable indeed! The song added another layer to the already jam-packed trailer, making it all the more epic (and making me all the more excited for the season!).

It’s no secret that a significant part of Westworld‘s narrative, at least the narrative of the first season, is nudity. Tasteful nudity. In a world where stripping down to nothing in front of a camera can very quickly go from artful to gratuitous, Westworld has stood out as a prime example of how the naked body can add to the story, instead of distracting viewers away from it.

Thandie Newton (Maeve) was certainly no stranger to appearing nude on the show, and has spoken in the past about the comfort she felt while in this state on set, which is a nod to the professionalism the show’s cast and crew. However, according to Games Radar, the actress was actually offered the opportunity to have a body double take her place for these scenes, a proposal that she ultimately shot down.

According to Newton, a big reason why she passed on this idea had to do with the control over her character that she would be giving up:

“They did offer body doubles quite often, but I didn’t want someone else doing it because they would’ve done it differently to the way I wanted to do it, because body doubles aren’t always actors. I was a dancer too, for a long time, so I know that I can suggest things with my posture and my body – even things like holding the bird and knowing that it’s going to cover certain parts of my body – and I can do it in such a way so that it’s not gratuitous, because I have a sense of what my body can do. It was dance really, it was mime.”

Performing without clothes is an art form in itself, and we’re lucky that Newton has the capability and the confidence to pull it off without sacrificing any part of her performance.

Check out each of the source articles, and let us know what you think!