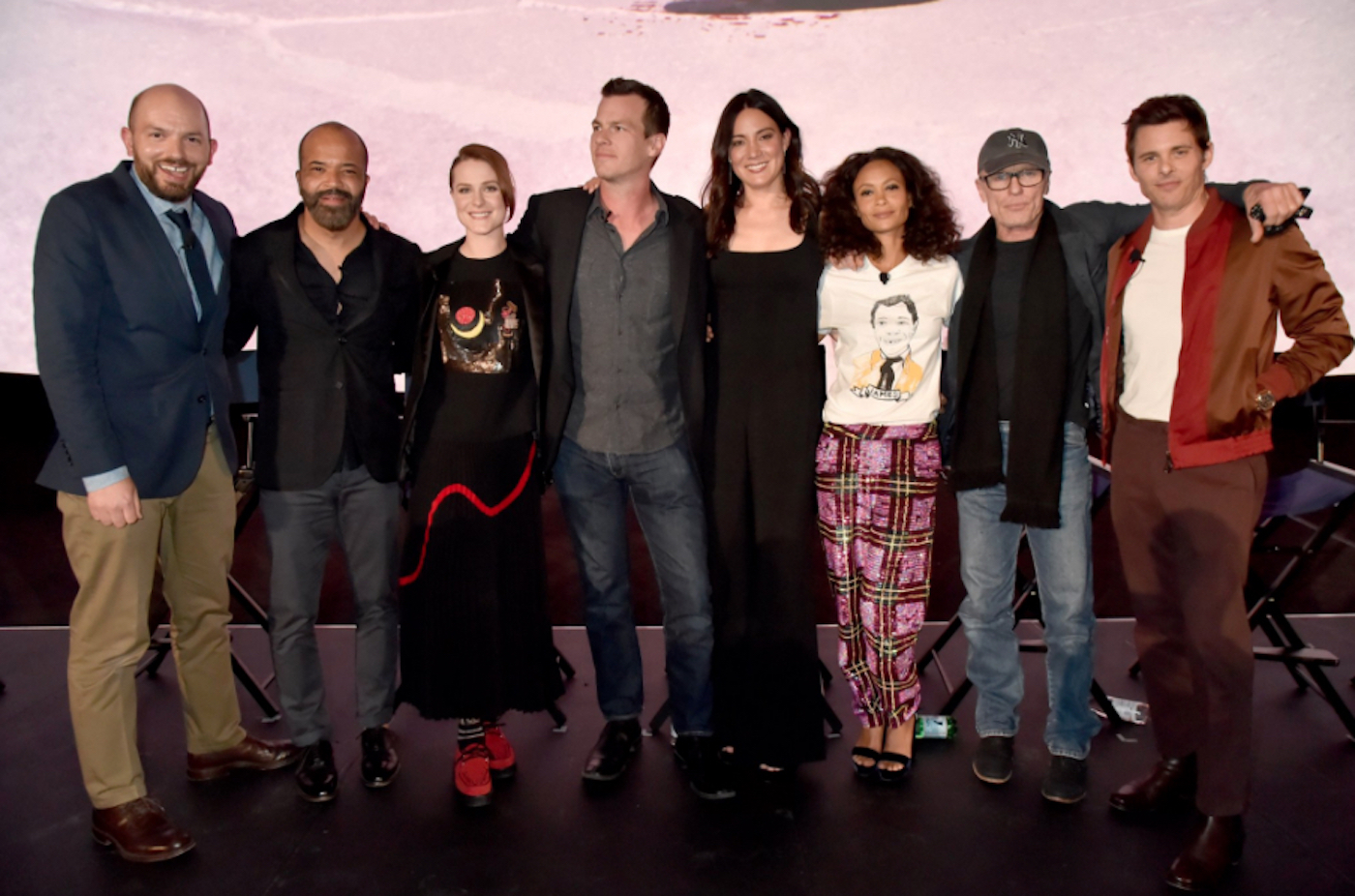 As the week for Westworld‘s second season continues, the show’s cast and crew found themselves on stage once again for an Emmys FYC panel, hosted by actor Paul Scheer. From the show were co-creators Jonathan Nolan and Lisa Joy, and stars Evan Rachel Wood (Dolores), James Marsden (Teddy), Thandie Newton (Maeve), Jeffrey Wright (Bernard), and Ed Harris (Man in Black).

HBO PR covered the event on their Twitter, and captured some great lines from the actors and creators. Wood compared the ‘crazy’ ride of shooting the season to being on a mixture of two extreme reality shows. “Shooting Westworld is like being a contestant on Chopped while on the Deadliest Catch boat,” said the show’s leading lady. “It’s crazy and everyone is sleep deprived but they give you all the ingredients to make something amazing.”

Newton couldn’t help but describe her character’s current state in bleak terms, but managed to spin her choice words into a motivational message. “Maeve is fucked if she leaves and she’s fucked if she stays. So basically this season is – what do you do when you have no answers?” said the actress. “You have to find a way through it and that’s when miracles happen.”

IndieWire was also in attendance, and captured one of the more interesting answers of the night from Harris, who opened up about the MIB more than we’ve ever heard up to this point. When asked by Scheer to summarize his character in one word, Harris asked for permission for two words, and gave the answer, “Make amends.”

Harris elaborated about his character’s change of heart futher, saying, “I see him as a protagonist actually, yes. Particularly this season. The maze is […] history. He’s on a whole other track this year, and I think the track that he’s on definitely makes him a protagonist. I’m worried about Season 3, to tell you the truth.”

It’s very interesting to learn that the character who was set up so well as the villain in the first season is now being taken in the exact opposite direction. Now the question is, on which team is he serving as the protagonist? Is he fighting for the hosts’ cause, or for the humans’? Given his stake in the park and how much he values his time within his playground, it’s difficult not to think that he’s going to be fighting as hard as he can to stop the humans from suppressing the android uprising.

Plus…did we just get a hint about a season 3 pickup? Or could that just be wishful thinking from Harris?

Check out IndieWire‘s full article about the FYC event, as well as HBO PR’s thread of quotes below, and let us know what you think!

“Shooting #Westworld is like being a contestant on ‘Chopped’ while on the ‘Deadliest Catch’ boat. It’s crazy and everyone is sleep deprived but they give you all the ingredients to make something amazing.” –@evanrachelwood (Dolores) #FYC pic.twitter.com/OWC1DN9sg3

“I’ve never done a series like this. It’s so deep within Jonah’s and Lisa’s heads and it’s so great to help them get it out and articulate it. The excitement and commitment they have is incredible.” -Ed Harris (Man in Black) #Westworld #FYC pic.twitter.com/jd7rzUmVyn

“It was fantastic. It was like being on the perfect stretch of highway in the best Ferrari in terms of your crew and incredible cast. I was thinking, ‘Just don’t crash.'” -Lisa Joy (EP/co-creator) on directing for the first time on this season of #Westworld #FYC pic.twitter.com/zDjDkKPy0w

“Maeve is fucked if she leaves and she’s fucked if she stays. So basically this season is… What do you do when you have no answers?” –@thandienewton “You have to find a way through it and that’s when miracles happen.” #FYC #Westworld pic.twitter.com/yw62Idxj4t

“I’ve never felt so off balance and secure at the same time.” -James Marsden (Teddy) on shooting #Westworld #FYC pic.twitter.com/HkWrCkZEaY

“I am absolutely wrecked after each season but so fulfilled creatively, emotionally, and spiritually. I feel like these people are my family. We are our most primal selves on the set so we deeply connect with each other.” –@evanrachelwood on shooting #Westworld #FYC pic.twitter.com/zq4dW1gWzR