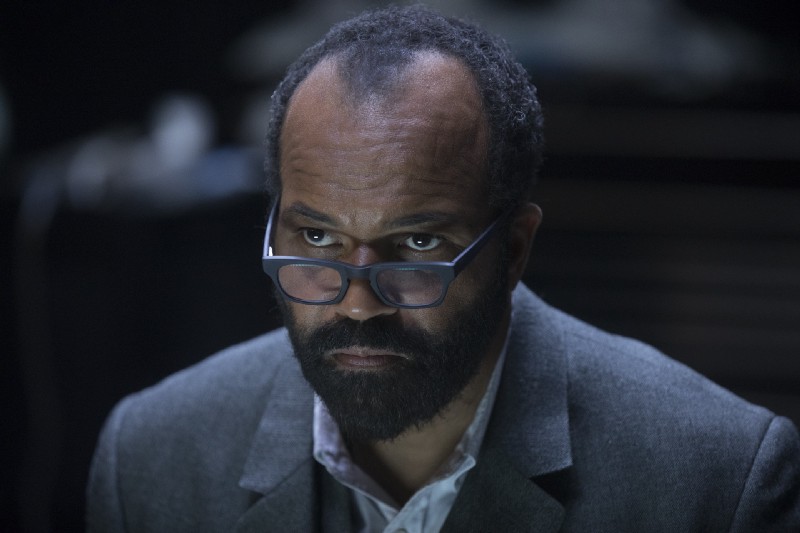 Westworld season two is almost at an end, but we still have plenty of interviews and news to share before the finale. Jeffrey Wright discusses Bernard’s awakening and Westworld secrecy, James Marsden talks AI and Westworld season three, and showrunners Jonathan Nolan and Lisa Joy tease the finale and where the show is headed in seasons to come. Read on for more, plus news about a very special Westworld edition of Carpool Karaoke!

Speaking to TheWrap, Jeffrey Wright reveals that Bernard choosing to remove Ford’s code from his mind was an important step forward for his character. “I think part of that decision was born out of Bernard exercising choice. And so Bernard is quietly and consistently emerging now, and he is thrusting himself into the middle of things. And, likewise, the rest of the world is heading in that direction too. So he’s driving toward his self-determined fate.”

He continues, “That’s Bernard’s version of an awakening. He’s been a little slow out of the gate relative to the other [hosts], but his desire for freedom runs through Ford. So that’s part of the unresolved business that needed to be sorted out. That was absolutely necessary to where he needed to be headed, so we’ll see where he ends up with it.” Given that we see Bernard asking Ford for help in the finale teaser, he may not be entirely free of Ford just yet.

Wright also shares his thoughts on playing Bernard and the secrecy involved with the show with The Hollywood Reporter. He admits his role can be challenging at times. “As complicated as season one was, season two was that much more complicated. Even the email logistics. I would get scenes that were encrypted with passwords from six or seven different episodes in the course of one week, and then I would get the rewrites, and then had to figure out how they all worked together.”

The secretive nature of Westworld makes working on the show difficult, but Wright believes it’s necessary. “It’s hard, but at the same time, it would make the job harder if you let these things out,” he explains. “If it’s known at the top that Anthony Hopkins is coming back this season, then the question becomes, ‘Well, how does that happen?’ Then we have to say, ‘Oh, well, there’s a simulation that exists where you can upload yourself.’ There’s so much narrative discovery that’s given away.” He adds, “The harder thing is talking about the show and not talking about the show at the same time. That’s a bit of a trick.”

Check out the full articles over at TheWrap and THR. 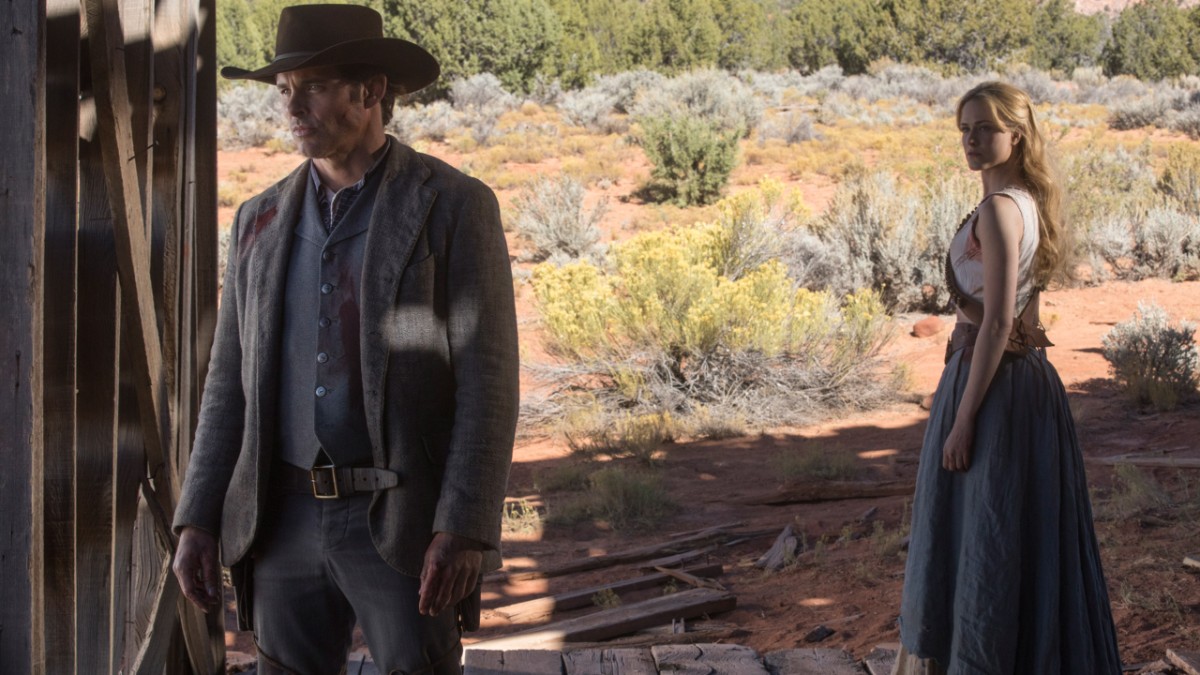 In an interview with the Toronto Sun, James Marsden gives his thoughts on the portrayal of artificial intelligence in Westworld. “We’re taking the concept of this theme park and we’re building on that. And basically the themes we want to explore are the future of artificial intelligence, the future of fully immersive video gaming, and more importantly than that, the sort of ethical, moral questions that go along with it.”

He confesses he doesn’t know as much about AI as he should, but he’s learning. “I’m slowly being educated on the dangers of it. But someone told me the other day, ‘Humankind usually fears what they don’t know much about or don’t understand typically, historically. A.I. is the direct opposite of that. The more you know about it, the more you fear.’ And I don’t know enough about it to know how much to fear because in my mind, it’s simplistically, ‘Well, we created these things, so we just have to shut ‘em down.’ It’s scarier than that.”

In the latest episode, Marsden’s character Teddy commits suicide – but his death may not be as final as it seemed. When asked about Westworld being renewed for season three, Marsden seems to admit his involvement. “Those are the words that you always want to hear because one, it’s obviously job security, but beyond that it’s a testament to the people who watch the show who are invested. At the beginning it was like, ‘Are people going to care about two robots who have feelings about one another?’ So I love when you hear that season three is being picked up. It’s like, ‘Awesome.'” 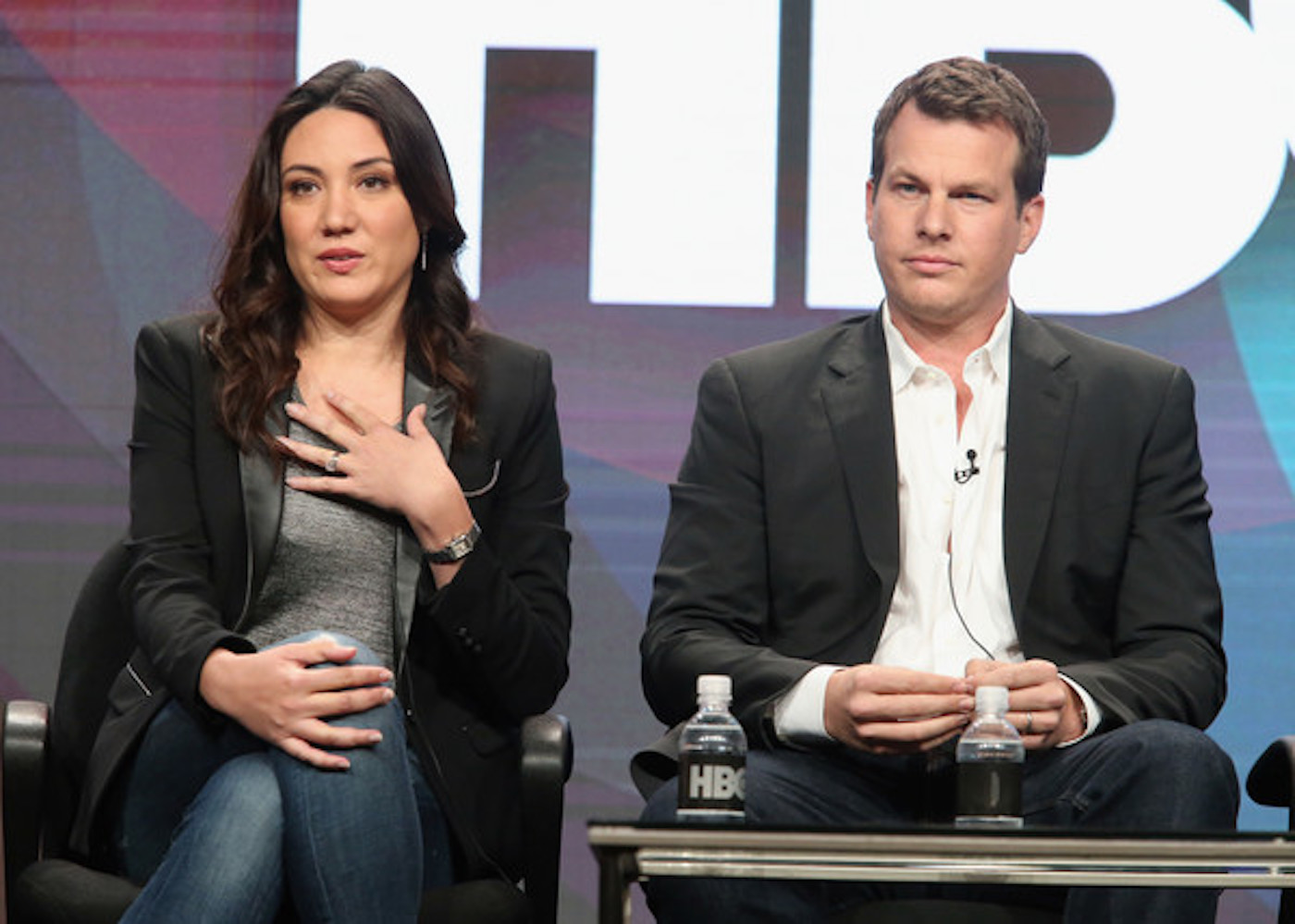 BFI Southbank in London held a Westworld finale screening last night, and showrunners Lisa Joy and Jonathan Nolan were on hand for a Q & A session. In an article about the event at Den of Geek, Nolan discusses the concept of free will and how it influenced the finale title. “We started with this proposition in the finale that ‘oh, actually humans don’t have free will’, which felt like a bit of a science-fiction conceit. Then the more we read about it, the more experimental evidence there is that that is actually the case.”

“If you image someone’s mind and put them in an experimental test, even doing something simple like, press a button on the left or a button on the right to click the right image, what they found…is that about a millisecond or so before you make the conscious choice to press the button to the left or the right, something else in your brain makes that decision for you. You can see it.” This inspired the finale title, as Nolan explains, “The name of the episode is ‘The Passenger’ in part because there is this other thing really at the wheel—our subconscious.”

Over at Digital Spy, Nolan and Joy reveal that they already know how the series ends. “When we were writing the pilot, I pitched a scene to end the entire series on and so far we have not deviated from liking that scene,” Joy admits. “As a writer, you never want to tempt a smiting from the TV gods, so we’d never venture to guess how many seasons we will live for. But I do think that there are tentpole moments that we’re trying to work towards and hopefully we’ll reach our ending in the time that we have.”

Nolan adds that while Westworld‘s mystique is part of its appeal, but they never want to go overboard or drag it out too long. “We don’t want to wear out our welcome. We have no interest in making this show until it hits syndication. We don’t want to do this forever. Luckily, we’re at a moment in television which you don’t have to do that.” He continues, “For us, we’ve approached the logic of making the show a little more like a film franchise, where each season settles its debts for the most part with the audience and sets up some interesting questions for the next season.” Hopefully Sunday’s episode will solve this season’s mysteries!

Head over to Den of Geek and Digital Spy for more.

Still reeling from watching Teddy’s tragic suicide in front of Dolores on Sunday? James Marsden and Evan Rachel Wood will attempt to lighten the mood in a special Westworld episode of Carpool Karaoke this week! Check out the details from Apple TV below:

Hum along to the theme song you know and love.#Westworld meets @CarpoolKaraoke this Friday.
Only on the Apple TV App.
cc @WestworldHBO@evanrachelwood#JamesMarsdenhttps://t.co/FxPsfj4wUQpic.twitter.com/vEssrnNdsE