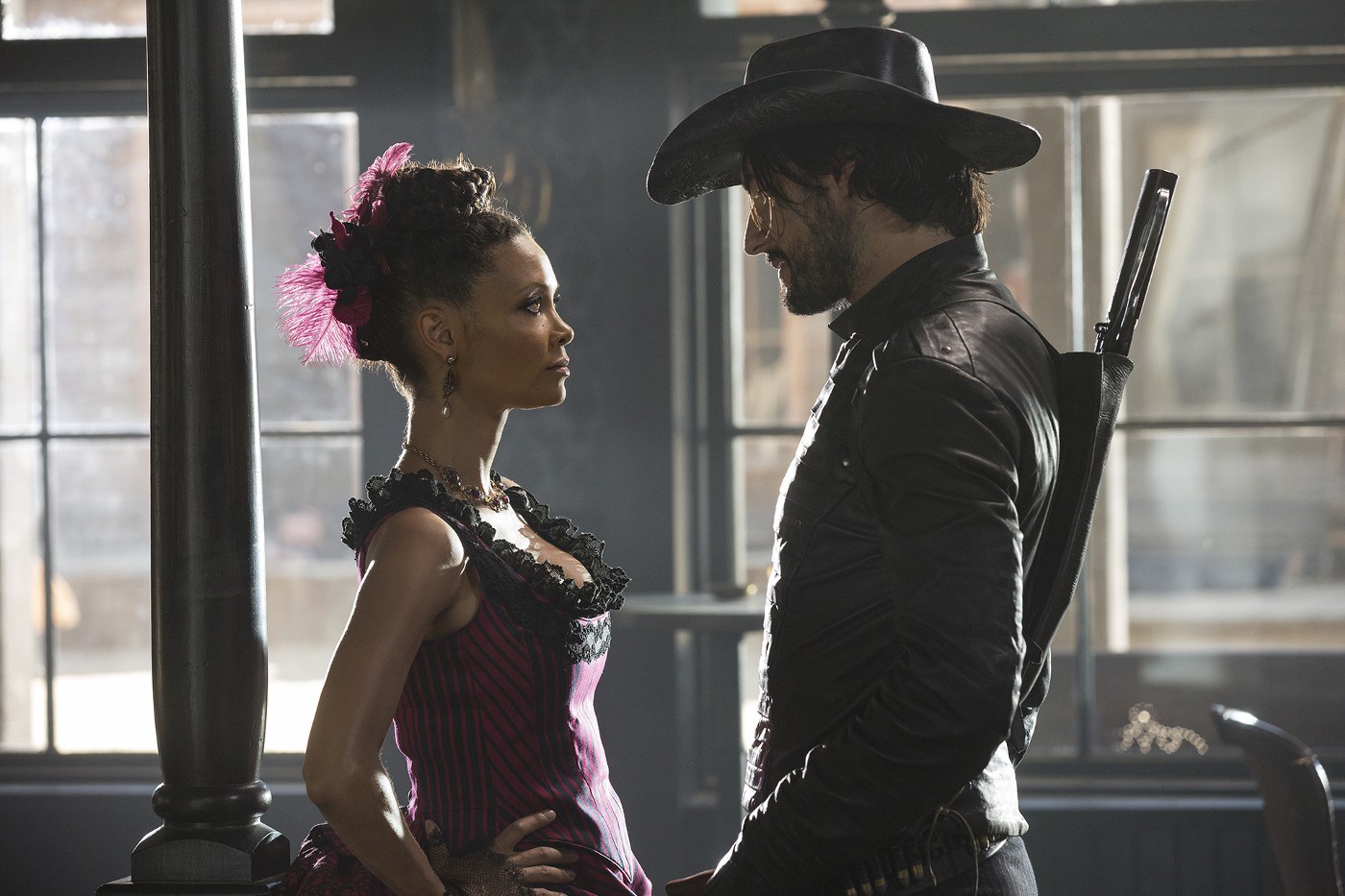 At the end of episode three (“The Stray”), Dolores (Evan Rachel Wood) quits being the damsel and takes matters into her own hands – shooting Rebus (Steven Ogg) and escaping the ranch. In “Dissonance Theory,” Dolores’ confused flashbacks continue to overlap with the present as she goes off her loop.

This episode also sees Logan (Ben Barnes) dragging William (Jimmi Simpson) to the dark side, the Man in Black (Ed Harris) making a breakthrough in search of the maze, Dr. Ford (Anthony Hopkins) intimidating Theresa (Sidse Babett Knudsen) in defiance of the Delos board, and Maeve (Thandie Newton) making an enlightening discovery. 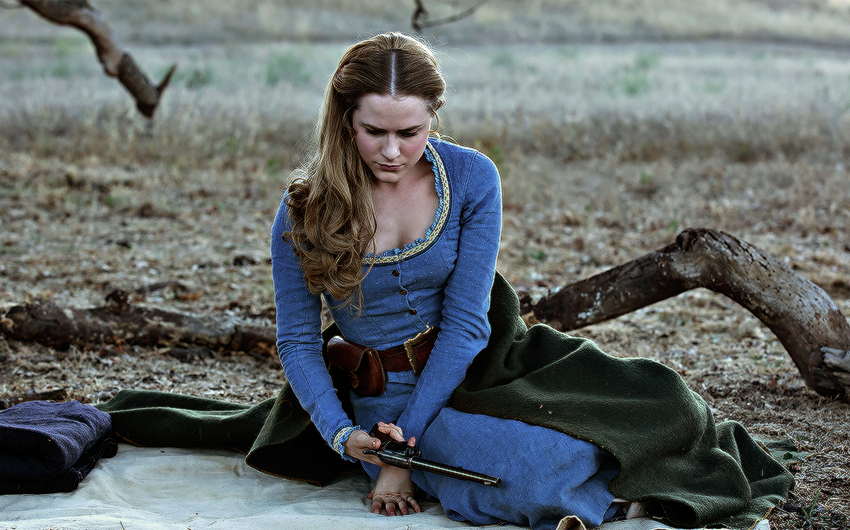 Dolores has another flashback to a session with Arnold (Jeffrey Wright); she tells him about her parents being killed. When Arnold offers to make the pain go away, she replies, “The pain, their loss, is all I have left of them.” Arnold remarks on her unique way of thinking. Dolores wonders if there is something wrong with her – if not her, then something is wrong with her world.

She’s worried she’s losing her mind, so Arnold asks her to try a secret game, called “the maze.” If she finds the center, “maybe [she] can be free.” Now we know that the likelihood of her achieving this goal – of gaining consciousness – was extremely low. Bernard observes later in the season that most of these hosts (the ones programmed by Arnold to have an “inner voice”) went insane. That Dolores ultimately did not is a testament to how unique she is among his creations.

Dolores wakes on the ground with the gun still in her hand. Her memories overlap each other – first she’s alone and then with William. She experiences these incidents throughout the episode, as she continues on a path she’s traveled multiple times over the years. Dolores has an encounter with Lawrence’s daughter in the present, prompting her to remember the town with the white church (Escalante).

When camped that night, William asks where Dolores is headed; she doesn’t know. She questions where her old path was taking her, saying she feels there is a place for her. Is her confusion due to her emerging self-awareness, or is it an effect of Dr. Ford implanting the Wyatt character into her code – maybe both? Dolores then has another memory, seeing bright lights as she lies dead in the street with a tech standing over her. William says she must be exhausted and takes her over to the campfire to rest. 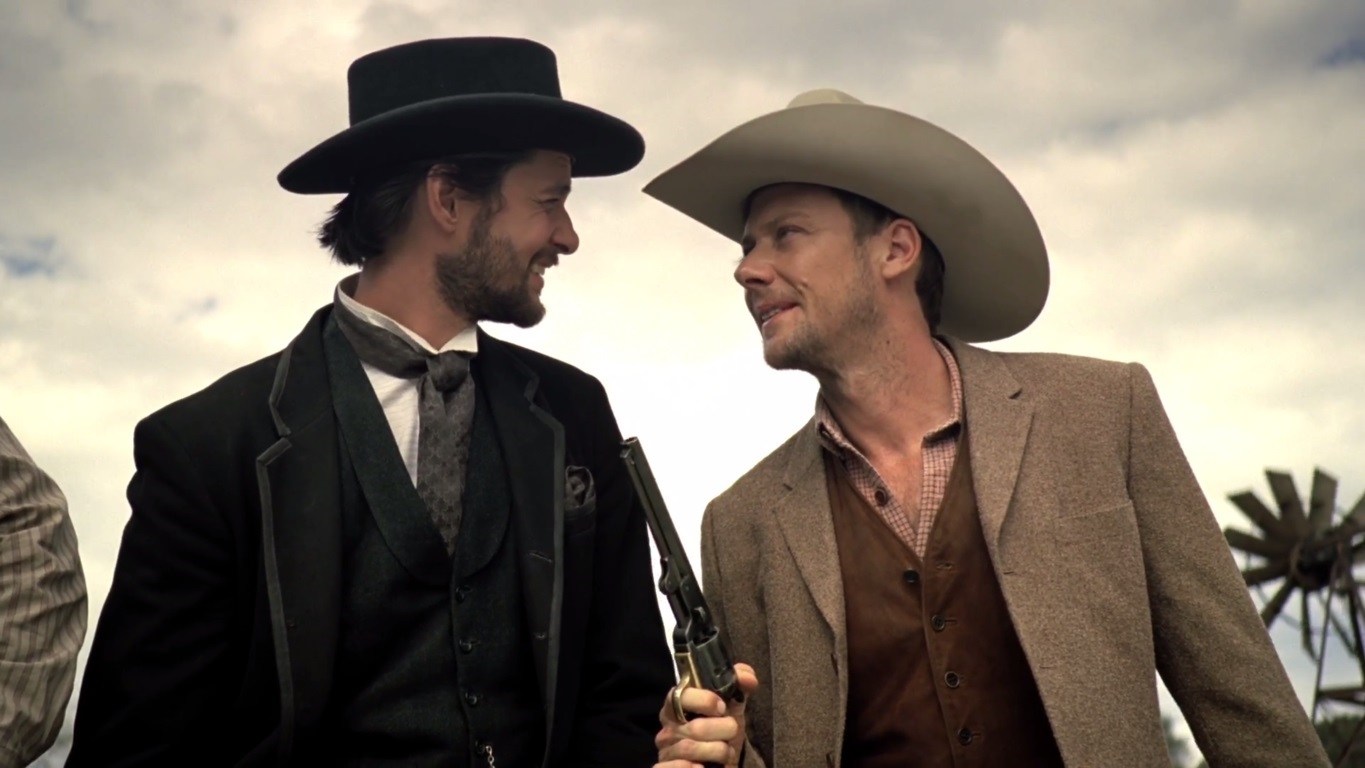 William has reservations about bringing Dolores along on the bounty hunt, but Logan believes the park management sent Dolores to them so William would have something to care about. Impressed, Logan expresses his desire to bump their company’s (Delos) stake in the park. When William expresses surprise that their vacation is actually a business trip, Logan responds, “With our family, everything is business.”

As the bounty hunter prepares to take William and Logan to apprehend the outlaw, Slim Miller (James Landry Hébert), William tells Dolores to stay with the horses. The men burst into the farmhouse where Slim has been holding a family hostage, and a firefight ensues. Logan gleefully shoots the hosts while William hangs back, reluctant to get involved.

Once taken into custody, Slim tries to convince the men to let him loose – they are only in it for the money, and his boss El Lazo (aka Lawrence – Clifton Collins Jr.) will pay double if they take Slim to Pariah. Logan proceeds to shoot the bounty hunter sparking protest from William, who says he killed an innocent man. Logan reminds William that they are only robots and says they got lucky – El Lazo is the ticket to “best ride in the park.” William tells him “the second we get away from the real world you turn into an evil prick.” Logan keeps protesting that it’s just a game and tells William to trust him. 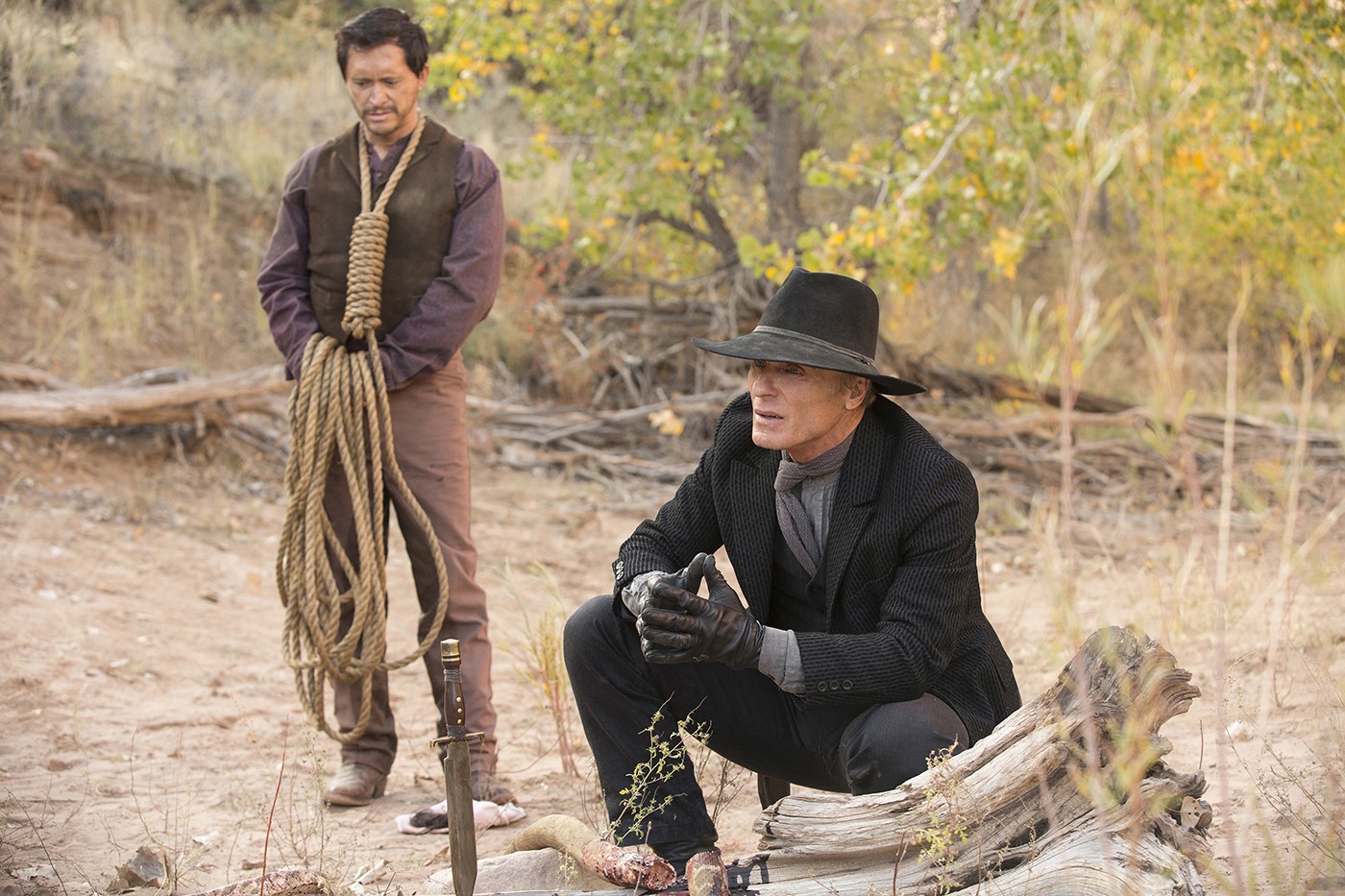 The Man in Black and Lawrence continue their adventure (aka television’s darkest buddy comedy) by finding “the place where the snake lays its eggs.” This cryptic clue led the duo to the tattooed Armistice (Ingrid Bolsø Berdal) bathing in the river. As they approach, her posse appears and hold them at gunpoint. The Man in Black explains he just wants to hear the story behind her tattoo and offers to join her gang. Not one for subtlety, he kills two of her men and tells her she seems to have “a couple positions open.”

That night at camp, we get a snippet of the Man in Black’s background as a rich and powerful man. Another guest comes over and tells him how much he admires him; his foundation saved the man’s sister. The Man in Black responds, “One more word and I’ll cut your throat…This is my fucking vacation.” Later, he makes a deal with Armistice – he’ll spring Hector (Rodrigo Santoro) from prison in exchange for the story behind her tattoo. The Man in Black proceeds to tell her about a man named Arnold who created a world where you can do anything except die. Her tattoo is the “last piece of the puzzle” that will allow him to unlock a story with real stakes.

After arriving at the prison, the Man in Black is thrown into a cell with Hector while Lawrence is prepped for the firing squad for his crimes. The Man in Black blows the lock (with a little help from Security) and rescues poor blindfolded Lawrence from execution – again. Armistice honors her end of the bargain and recounts her story to the Man in Black: when she was a child, masked men with devils’ horns rode into her town and killed everyone. Armistice painted herself with her mother’s blood to fake her death, so now she paints herself with the blood of every man she tracks down; only the head of the snake, Wyatt, is left. Since Wyatt is actually Dolores, I wonder if we will see an Armistice/Dolores showdown next season, or if Dolores will simply erase that storyline from her code?

The Man in Black and Lawrence set off again, and follow “Wyatt’s” tracks. They discover Teddy (James Marsden) tied to a tree, bloody and half dead. He asks to be put out of his misery, but the Man in Black apologizes, telling him “misery’s all you got.” Isn’t that the truth. 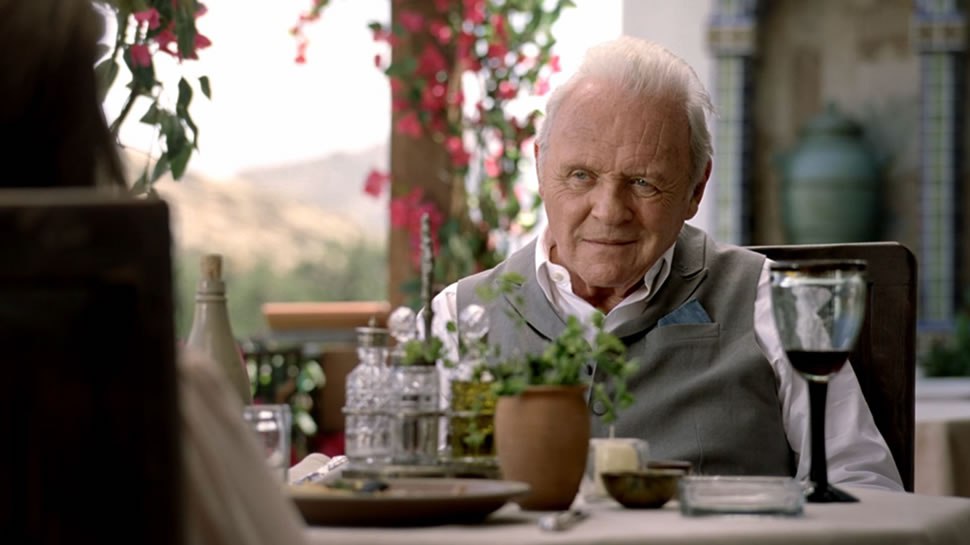 Elsie (Shannon Woodward) is trying to figure out why the stray host “killed” himself, and Theresa believes Elsie is rationalizing a screw up by Behavior. Theresa decides to have her Quality Assurance team take over. Bernard authorizes this, angering Elsie; she wonders why Bernard won’t let her tell anyone it isn’t just a glitch. Bernard replies that Elsie is just reading into their behavior and seeing what she wants to see – is this a genuine response or Ford’s programming?

Later, Theresa meets with Ford out in the park to discuss his new narrative. As they have lunch together (with Lee Sizemore’s rejected hosts laboring in the field), Theresa tells him the board is concerned about the extent of changes. Ford redirects the conversation, observing that Theresa doesn’t like the park. She claims to admire it, but working there made her realize she wouldn’t enjoy participating in it. Ford tells her they initially made hopeful storylines – he made a bet with Arnold that they would be just as popular – but almost no one joined them. It seems that Ford came to share Arnorld’s “dim view of humanity.”

Ford goes on to unnerve Theresa by freezing all the hosts surrounding them without a word. He then explains that he knows everything about the guests – and the employees – before warning Theresa to be careful with Bernard. Ford calmly but threateningly asks her not to get in his way. He concludes the conversation by saying the narrative will be completed on time and not to worry – it’s not a retrospective. Ford isn’t the sentimental type. 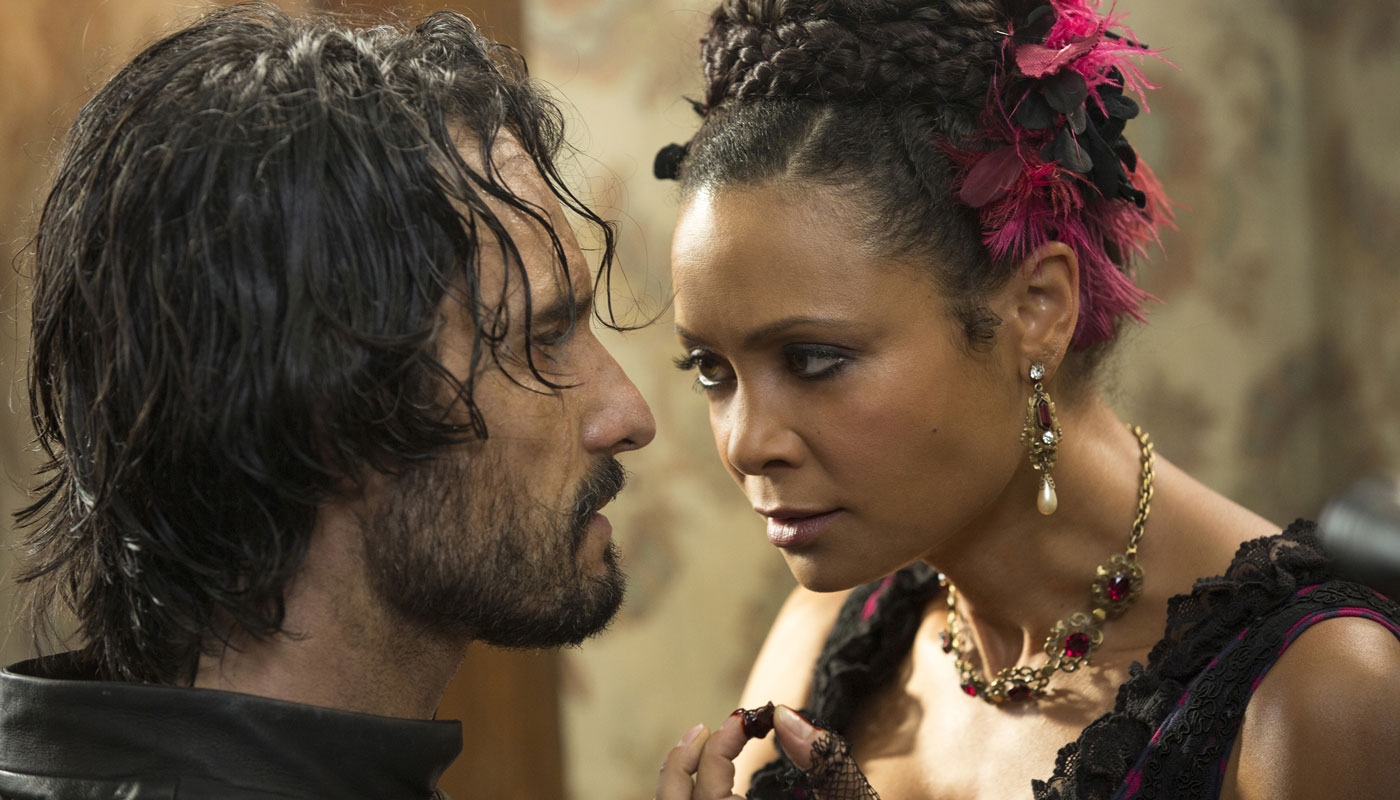 Maeve’s flashbacks continue to haunt her. While talking with Clementine (Angela Sarafyan) Maeve visualizes Clementine lying dead on the floor with blood running down her face. Maeve then remembers herself lying beside her with a gunshot wound to the stomach and sees herself on a table being repaired. Disturbed, she draws a picture of a tech like the ones from her memories; when she goes to hide it, she finds she has drawn this figure before – many times.

Later, Maeve sees a group of natives walking through the streets of Sweetwater. A young girl drops a doll that looks like a tech figure from Maeve’s visions. When Maeve tries to get answers about the doll, she is told the figure is part of the natives’ religion; they won’t share any information with her about it. A conversation with Clementine reveals that the outlaw Hector lives with the “savages,” and you can see Maeve concocting a plan to get the answers she seeks.

As the episode draws to a close, Hector and company ride into town – shooting lawmen and citizens with impunity before heading into the saloon to steal the safe. Maeve pulls a gun on Hector and says they need to talk; she will give him the safe combination if he gives her answers (nicely paralleling the Man in Black/Armistice bargain). When asked about the tech figure, Hector calls it a “shade” sacred to native lore. He says they were sent from hell to oversee this world. Maeve then explains her memory of being shot, with one of the “shades” standing over her.

Hector cuts into her abdomen, finding a bullet. He asks what it means and Maeve responds, “That I’m not crazy, and none of this matters.” It’s a similar philosophy to Hector’s, since he believes the world will “end badly;” nothing anyone does can change it. He uses that as an excuse to engage in all manner of criminal behavior, but we know that Maeve’s programming causes her to take action to improve the situation – at least for herself. It will be interesting to see how her perspective changes next season.

Did you pick up on anything new in this episode? Let us know in the comments!