As the long anticipated production for season 2 of Westworld begins, news is slowly but surely trickling in. From Evan Rachel Wood‘s (Dolores Abernathy) corset training, to James Marsden‘s (Teddy Flood) gunslinging, to Jeffrey Wright (Bernard Lowe) heading west, there have been several indications that filming is underway.

New members are being added to the cast as well; yesterday we received an announcement that The Leftovers star Katja Herbers has joined Westworld for season two. Now we have an indication of another new cast member, courtesy of actor Louis Herthum‘s (Peter Abernathy) Twitter account! 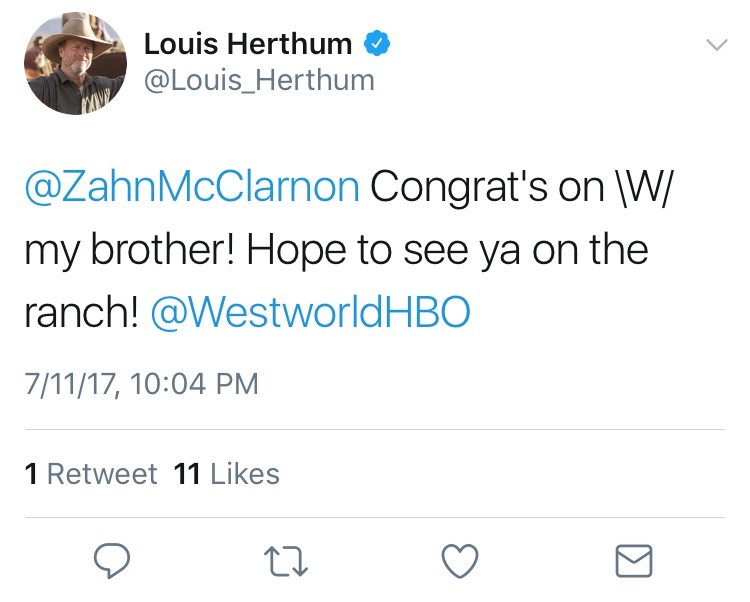 While we have yet to receive official confirmation, it seems Zahn McClarnon will be joining the cast for Westworld‘s second season. McClarnon is no stranger to the western genre, currently appearing on AMC’s The Son and working alongside Herthum on A&E’s Longmire. Hopefully an announcement with more details on McClarnon’s role will be forthcoming.

In other news, we have more filming information to share! Our first concrete dates arrived last month, when California resident and WestworldWatchers reader Jeanne sent us the exciting news that Westworld had returned to Santa Clarita’s Melody Ranch Motion Picture Studio for filming on June 22nd.

Now we have more dates courtesy of Jeanne! Westworld will be filming at Melody Ranch again this week – July 13th and 14th. Last month’s shoot took place on the town set (used for the streets of Sweetwater), but the next two days of filming will occur indoors in one of the studio’s sound stages. Thanks to Jeanne for the information!

What do you think of this news? Feel free to speculate away in the comments!