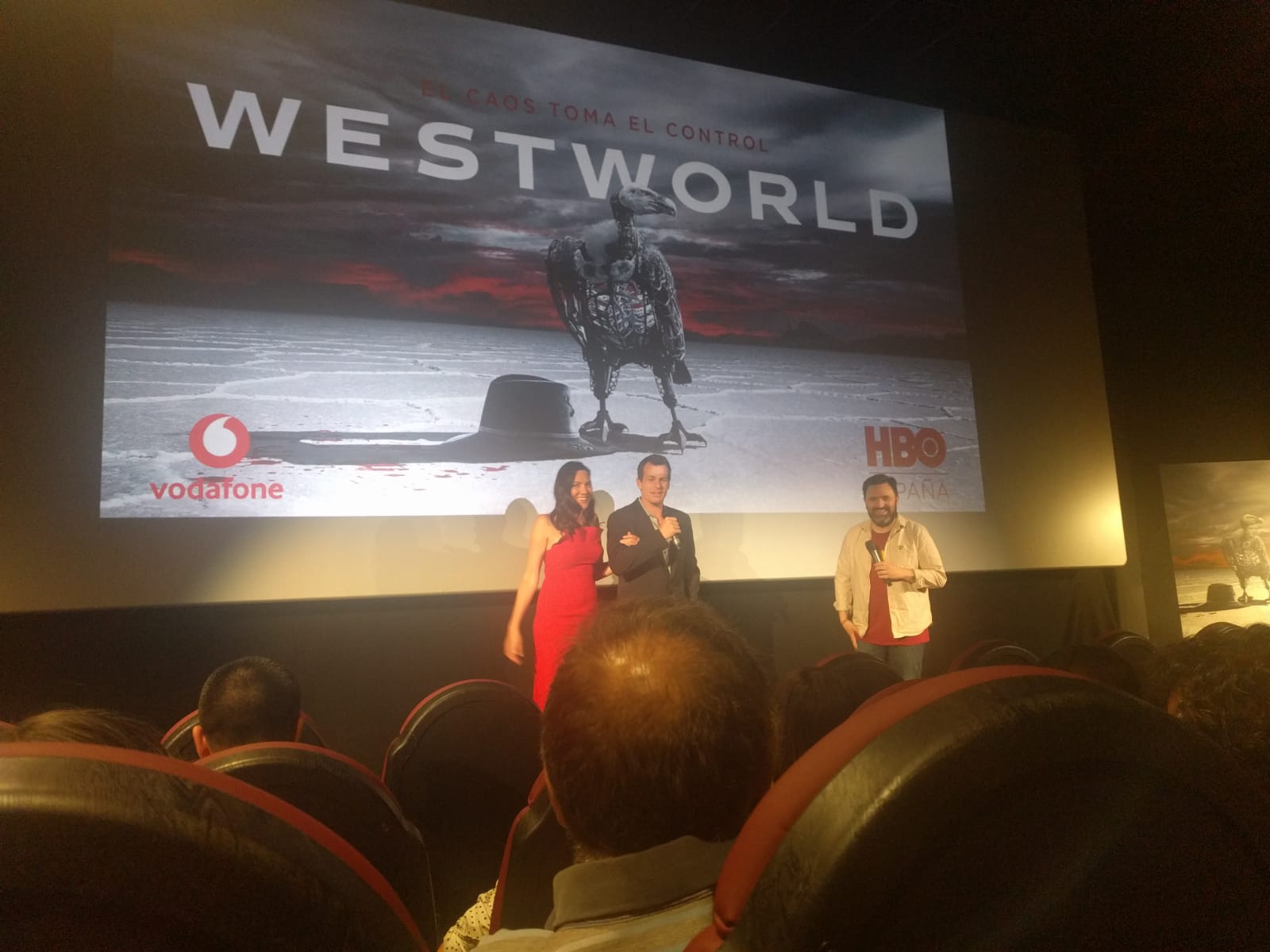 We have another day to wait before the Westworld season two finale, but some lucky fans were able to see it a few days early during finale screenings in London and Spain. Fortunately for us, Javi Marcos from the Game of Thrones Spanish website Los Siete Reinos – and a friend of this site – attended the Spain event. We have several photos, plus quotes from the question and answer session with showrunners Jonathan Nolan and Lisa Joy, courtesy of Javi. Read on for a look inside the event!

Is this the door Ford was talking about? I would definitely leave the hats – no brain scans for me thank you. 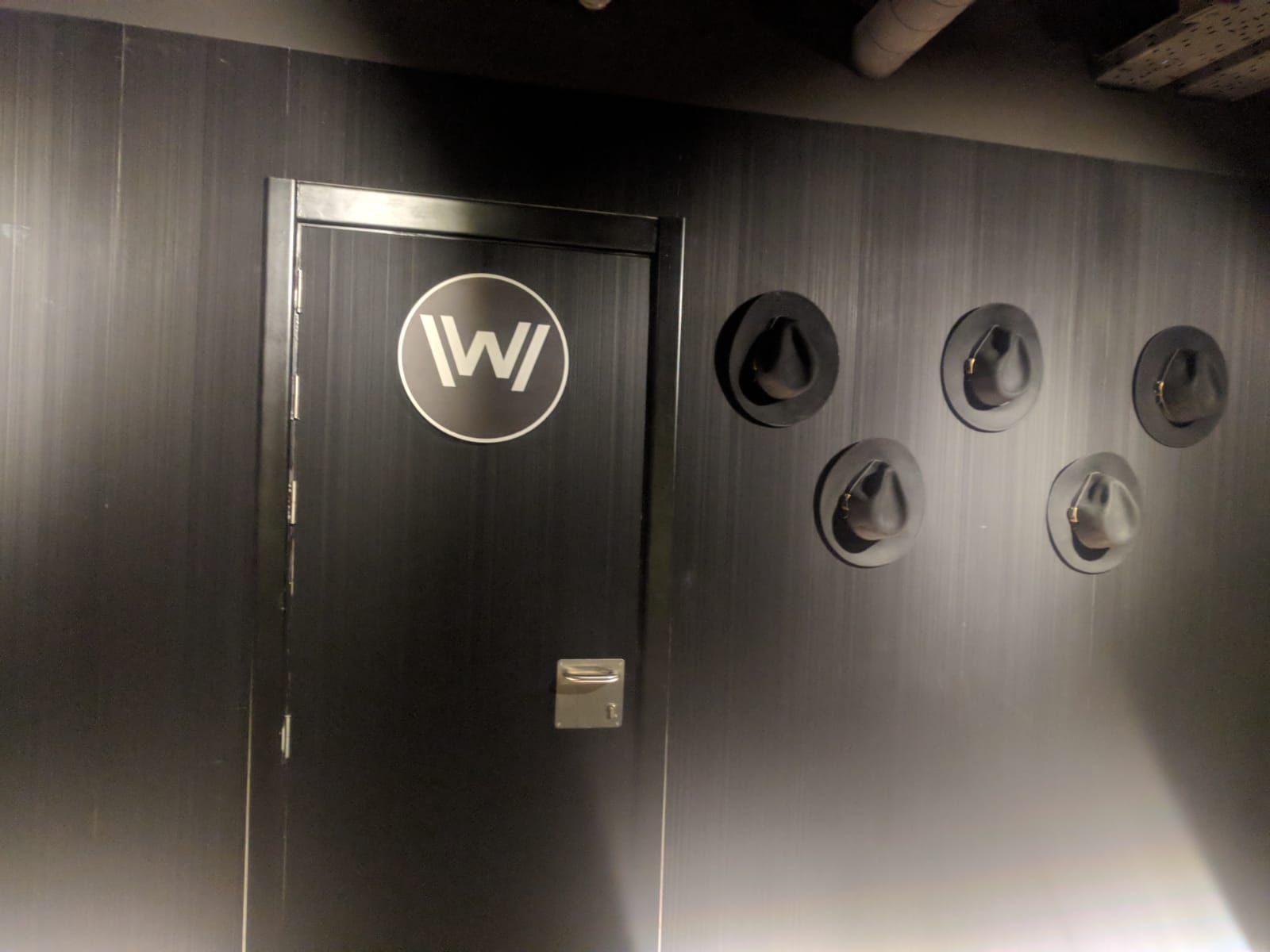 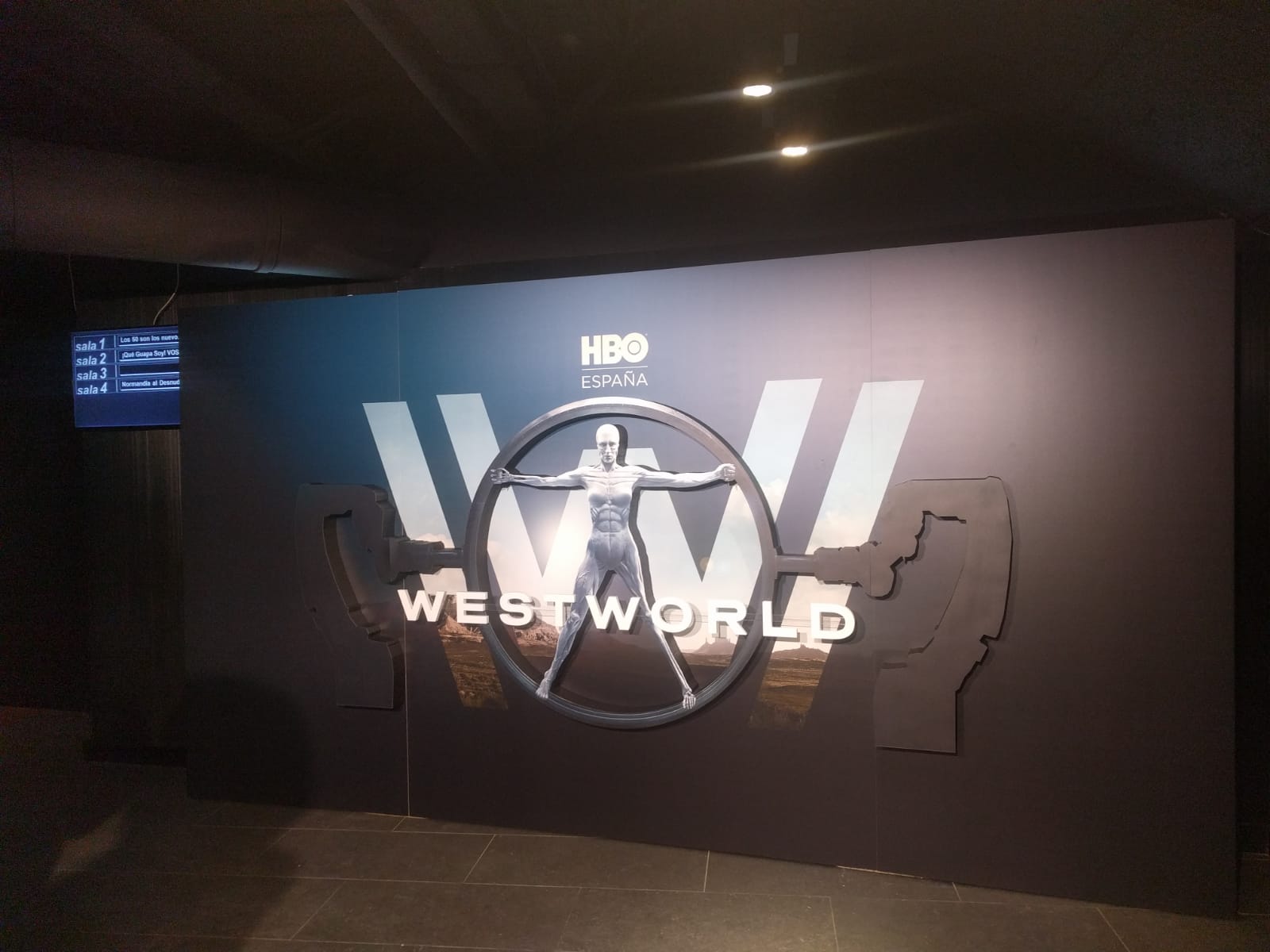 A shot of the screen before the finale episode, and no we don’t have any photos from the finale itself – sorry guys! 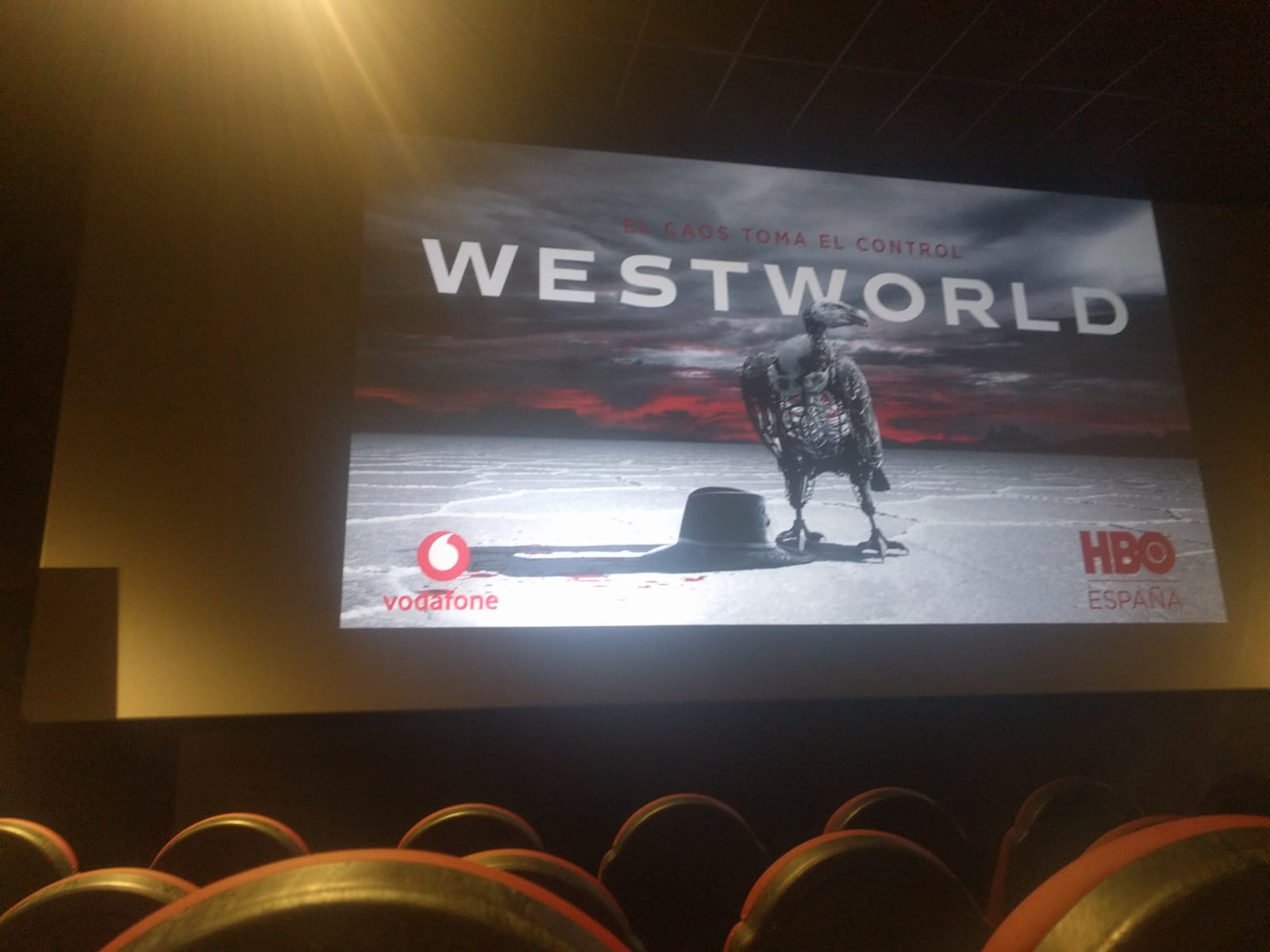 Nolan and Joy during the Q & A session. 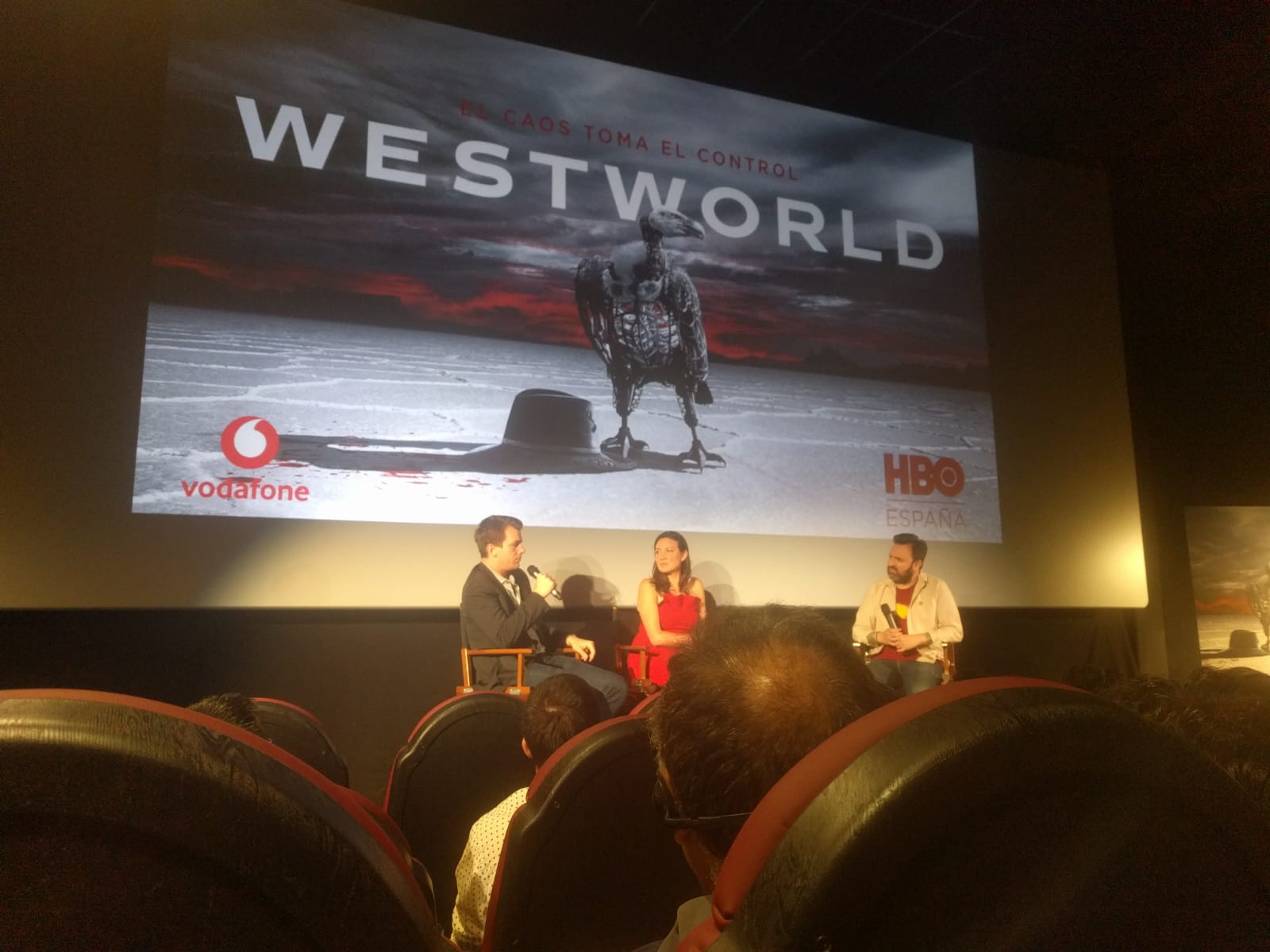 During the Q & A Nolan and Joy answered questions prepared by the host, as well as audience questions. Here are some of the highlights.

Joy on the “puzzle box” nature of Westworld versus focusing on character:

“Making the show is a team sport – we intentionally leave Easter eggs and clues for our audience because we want them to play along if they’re so inclined…we actually like it when they find the things, and you can hear about their pride in figuring something out before the characters in the show.”

“There is complexity in the narrative, and it’s designed in such a way that we pay a lot of attention to the details. And people who want to engage in those details, and look at it again to piece the puzzle together are welcome to. Despite the complexity, at its core it’s a story about characters. It’s a story about a mother and her love for her daughter, a rancher’s daughter who’s trying to take on a new role in her life and making mistakes along the way and learn from them, and the hubris of man.”

“One of the greatest luxuries and delights of it is when you get an episode where you get a little bit more intimate with the character, and you see some of the nuances and new shades of light into their actions.”

Nolan on spoiler culture and the value of Reddit:

“I’ve always liked that kind of thing [figuring out the twist in a story early]. Reddit changes the equation a little bit because a lot of media reads Reddit as well, and then they turn those stories into mainstream media stories. That reaches the people who haven’t decided if they want to be part of that conversation, which is a little bit of a bummer.

“[Reddit] is a useful tool for figuring out if people are tracking what we’re laying down. I remember seeing the first post on Reddit on episode one or two, where we had two scenes back to back: Jimmi Simpson’s character [William] and then Ben Barnes’ character [Logan] says ‘I can’t wait to meet that guy”…and it cuts directly to Ed Harris’ [Man in Black] face, riding up on a horse. If you’re looking for it, it’s obvious. I remember…some person online saying ‘What if they’re the same person?’ and it was immediately downvoted [laughs].”

Joy on the dark portrayal of humanity in Westworld:

“I don’t think you can make progress as a society or say anything meaningful without acknowledging the harsh and devastating realities of the world around you…There’s this problem in history with the loops that humanity is on, we seem to be constantly drawn back – there are periods of peace and stability, but it’s very hard for it to last forever…So much of this suffering that happens – there’s no way for people to have a meaningful discourse about it. It gets immediately divisive, and fiction is a way of saying a truth in a way that allows for that kind of discussion.”

“I think there’s a lot of light in mankind too, and it’s all the more bright because you don’t have to be good in this world to survive…but it gives greater meaning when, in a world like that, your actions are good. That’s what gives them nobility. That’s what makes love what it is and why it’s powerful.”

One response to “Westworld Finale Screening in Spain: Photos and Q & A Session with Showrunners Jonathan Nolan and Lisa Joy!”