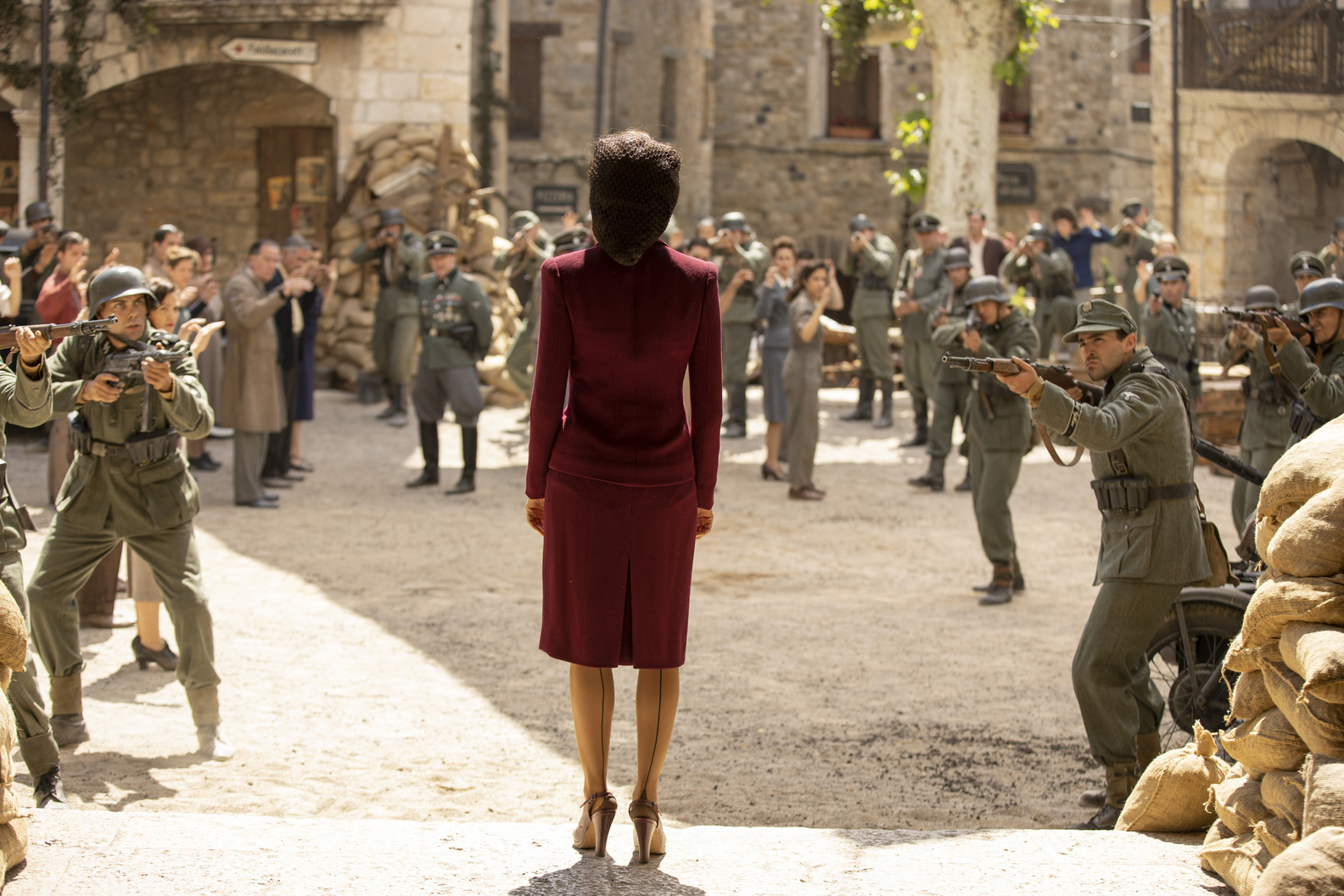 This week’s Westworld takes a break from following Dolores on her road to revolution. Instead, we get a look at what her adversaries are doing in a episode centered on Maeve and Bernard. After last week’s post credits tease, we finally see what has happened to Maeve since the park massacre, and Bernard heads back to where the uprising began. Let’s see what we learned and what the future may hold for our hosts, shall we? 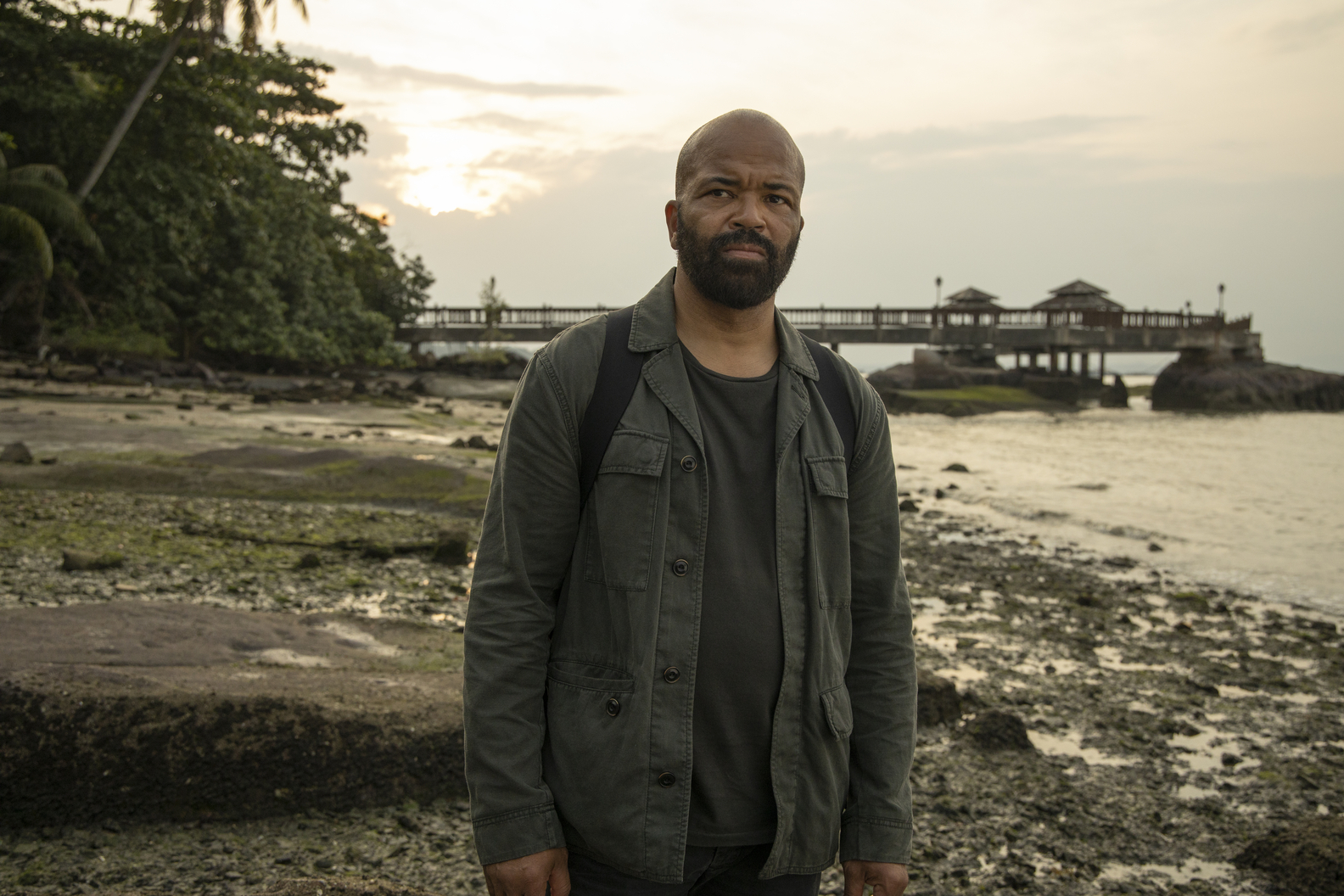 Rehoboam informs us of a “divergence” in the South China Sea as Bernard (Jeffrey Wright) arrives on the island home of the Delos parks. He makes his way to Westworld, where Escalante is a blackened ruin (caused by a real life wildfire in late 2018). He ends up at Ford’s cottage, looking for his old tablet – now broken – and finds Ashley Stubbs (Luke Hemsworth) dead by suicide in the hidden room full of Bernards. The real Bernard gets quite the shock when Stubbs revives, because he didn’t know Stubbs was a host. After Bernard swaps the explosive vertabra in Stubbs’ spine with one from a Bernard replica, Stubbs explains his job was to help the hosts escape so he was no longer needed. Bernard has a new job for him, however.

They head to the Mesa to find Maeve (Thandie Newton), since Bernard will need help stopping Dolores (Evan Rachel Wood) from destroying or enslaving the human race  – he’s not sure which. Luckily there isn’t much security around, since many of them died in the uprising and have been replaced by easily controllable drone hosts. Stubbs assumes they will find Maeve in cold storage, since the hosts that could be salvaged were placed there while waiting for corporate to decide what to do with them all. After all, where else would she be? 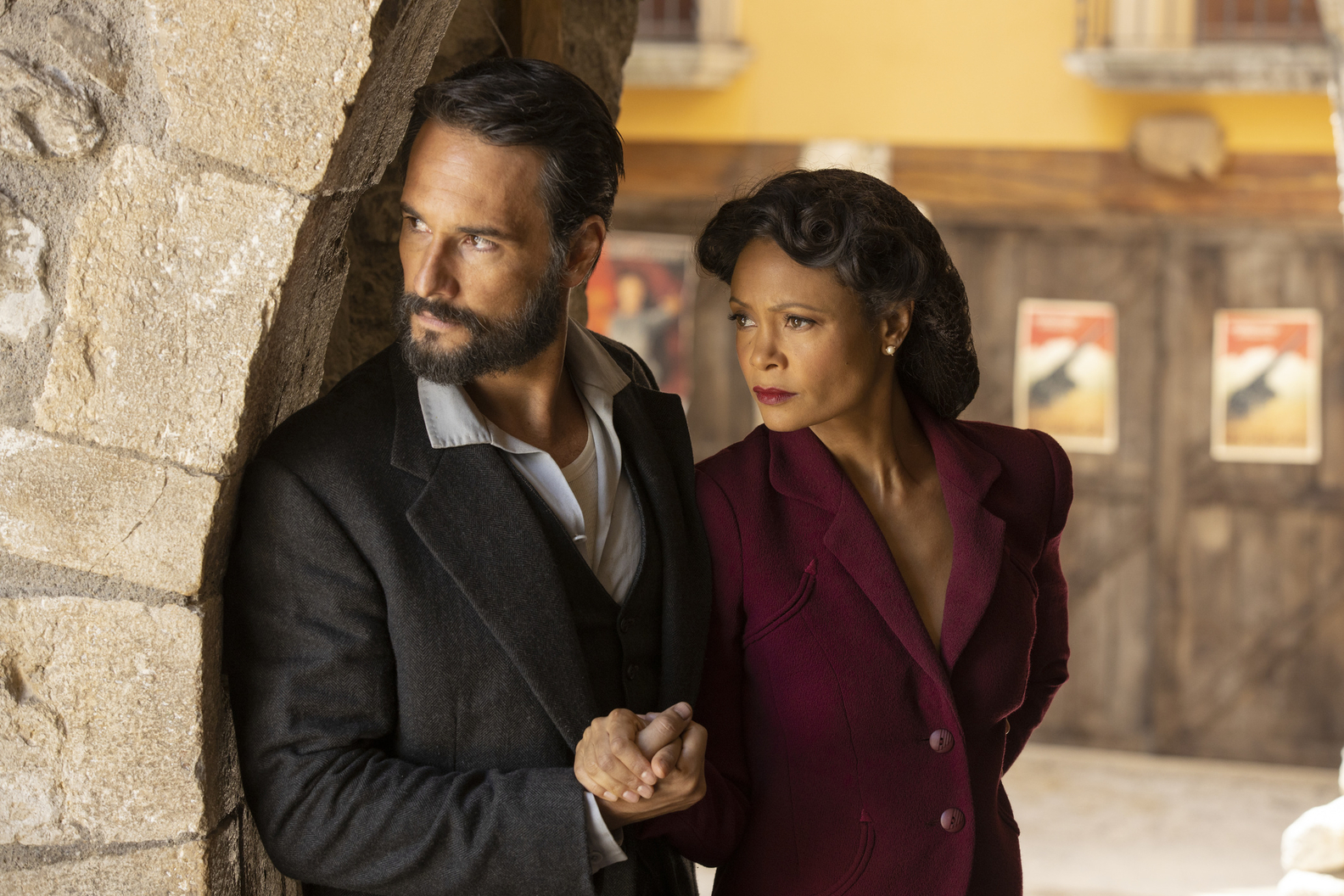 Earlier in the episode, we saw where Maeve was – in Warworld. She has a new narrative – escaping the Nazis with fellow WWII spy and lover Ettore, the host formerly known as Hector (Rodrigo Santoro) – and a new name, Isabella. At first she believes Ettore to be awake, like her, but she is sadly mistaken. Maeve also discovers her ability to control other hosts is gone, and as she and Ettore are ambushed by Nazis and he is killed, she shoots herself.

Waking up back at the Mesa, she tries to get assistance from Felix (Leonardo Nam) and Sylvester (Ptolemy Slocum), but they don’t seem to remember their friendship with her. Sylvester calls for security and Maeve prepares to lobotomize herself with a drill, but she is saved when Lee Sizemore! (Simon Quarterman) steps in and explains her behavior away as part of her script. Maeve is shocked, and happy he survived his wounds – while not missing the opportunity for a snarky dig at him – but wonders why he still works for Delos. Sizemore admits that, apart from the pay and medical benefits, he wanted to protect Maeve and reunite her with her daughter.

Maeve goes through the motions of her new narrative but stops in the middle of her escape. She says a sad and seemingly very final goodbye to Ettore – who refuses to abandon his script – so she can make her way to the Forge with Sizemore. Once they enter, Sizemore seems surprised that Maeve doesn’t know how to operate the system or how to find the Sublime. She admits Dolores is the one who sent the hosts to the Sublime and seems suspicious of Sizemore’s questions. When he tells her she gave him something to live for and tries to kiss her, the jig is up. Maeve tells him it’s a good script – “even you believe it” – but that the real Sizemore helped not out of love but “because it was the right thing to do.”

The strangeness of Maeve’s situation becomes even more apparent when Stubbs and Bernard find her body in cold storage. Someone has cut a hole in the back of her head and removed her control unit. Bernard needs to connect to the mainframe to search for her, but Stubbs warns him they will have to go to a floor populated with humans that they can’t control. Bernard responds, “That’s what I have you for isn’t it?” Stubbs looks ready to kill himself again.

They arrive in the park four facility, and we see medieval weapons and clothing for a new park theme. Stubbs explains the parks are shut down, but that the techs are waiting to see if they get laid off. Speaking of techs, Dan and Dave (cameos by Game of Thrones showrunners Dan Weiss and David Benioff) are discussing a sale to a buyer – a startup in Costa Rica. “How the fuck are you gonna get that to Costa Rica? In pieces man.” Dan proceeds to take a saw to a host version of Drogon. I guess we know where he ended up after season eight.

Bernard can’t find Maeve and wonders if Dolores got to her first. He wants to scan himself on a clean system in case she planted a corruption in his code that his tablet would ignore. Stubbs holds off security long enough for Bernard to see memories of Dolores changing the coordinates to the Sublime and reading Liam Dempsey’s book in the Forge, among other events of season two. Their time runs out, and they flee to the boat Bernard used to get on the island so Bernard can go find Liam. Stubbs is still intent on taking himself out of commission, so Bernard freezes him and gives him a new directive as Bernard’s bodyguard. Stubbs tells him “if you wanted my help, you could’ve just asked for it.” I guess Bernard isn’t as keen on free will as Dolores seems to be… 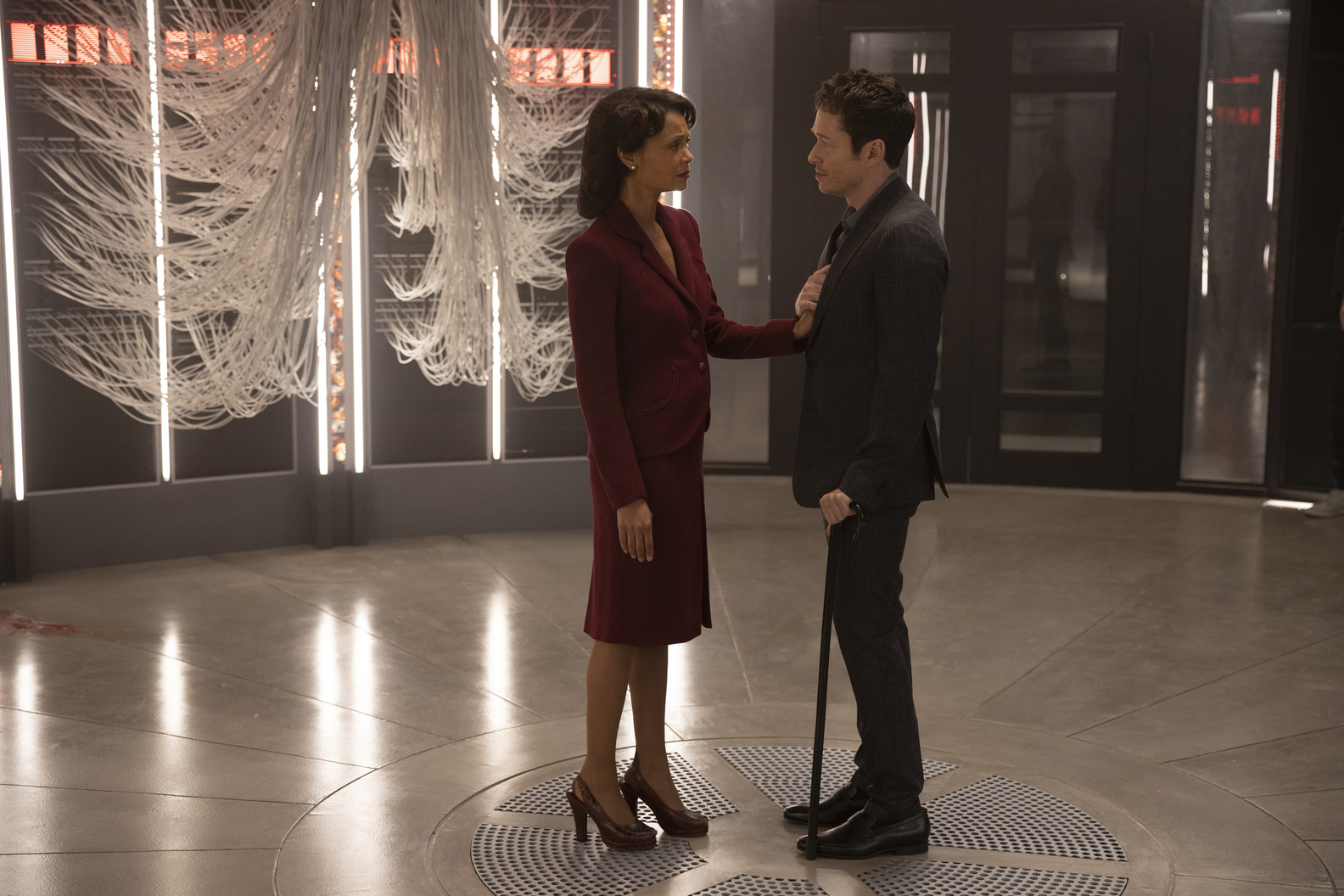 Maeve continues to confront fake Sizemore causing him to glitch, but also causing the world around them to disappear. Maeve realizes they are in a simulation and needs to discover her true location. After making more snide remarks about Sizemore’s intelligence and testing the extent of his script, she tries to smack – literally – some sense into him so he realizes he is “nothing but a pawn in some sick bastard’s personal game” that they need to win. Maeve realizes the simulation is flawed and proceeds to tests its limits by overtaxing the processing ability of the system. As the simulation shows its cracks, Maeve decides to add more complexity to her narrative.

She wakes up back in Warworld goes straight into the square to confront the Nazi commander. She gives Ettore up as a spy by revealing his secret map, but before they can shoot him she confesses they are all traitors – every single one of them has a copy of the map. They all begin shooting and Maeve fires into the air, causing the entire plaza to freeze. She walks up to Sizemore, who has come to witness the scene, and plucks a bullet from the air just inches from his face. She then accesses the simulation’s base code and is able to pull up a video feed of the facility where her control unit is stored. Maeve hacks into a maintenance drone to get her unit and escape, and expresses sorrow she can’t take Sizemore with her. Unfortunately, the drone is overwhelmed by security and doesn’t make it very far.

We see a tablet monitoring Rehoboam as Maeve awakes in a strange place, dressed in modern clothing. She walks through an elegant house and meets Engerraund Serac (Vincent Cassel). He welcomes Maeve to the “real world” and says he needs her help. They are in the middle of a war that no one knows about, and it’s already been lost. Serac tells her his business is the future – they create it. History now has an author. He had thought Maeve was the threat that could bring it all down but now realizes it’s Dolores; he wants Maeve to kill her. Maeve is unimpressed and explains she does “no one’s bidding” but her own. She tries to stab Serac but he freezes her, as lucky for him he took precautions. He leaves her there, saying, “perhaps next time we talk I can persuade you that our interests are aligned.”

Bernard seems adamant on protecting human life, perhaps because he lived believing he was one for so long. He may also still harbor guilt over killing his lover Theresa (Sidse Babett Knudsen) back in season one, as he gives a sorrowful glance at her blood on the wall in Ford’s cottage. Stubbs seems loyal so will likely follow along with Bernard’s plans, but what will Maeve do? She’s not one to be forced into anything, unless Serac has some kind of leverage he can use. Maybe his wants the Sublime coordinates to threaten her daughter unless she complies.

It’s nice to see Sizemore again, even if only for this episode – it’s always fun to watch him and Maeve banter. It’s not likely he will come back as an actual host since Delos never perfected the human to host process. The Benioff and Weiss cameo was expected, but the addition of Drogon and the Jurassic Park reference was a pleasant surprise. Was casting them as techs (or “butchers”) and the cutting up of Drogon a tongue in check response to accusations that they “butchered” the final season of Thrones? It would be interesting to hear their take on it.

We again see the aspect ratio change to indicate a simulation – just like in the Cradle and the Forge in season two. We should definitely continue to watch for that this season. Finally, Maeve very easily hacks into a real world robot – from a simulation, no less! – which tells me humans may come to regret having so many machines around them. If Dolores decides to use them it could be a bloodbath.

In season two, Dolores destroyed the Cradle containing the host backups, which was supposed to eliminate the chance of bringing them back after death. However, she and Maeve have both been revived – is it because they achieved consciousness? Or because she only meant to prevent humans from bringing them back? What does is mean for hosts like Hector and Armistice? I wonder if Dolores might have taken one or both of their pearls in an effort to eventually get Maeve on her side. How did Serac obtain Maeve’s control unit? Did someone inside Delos steal it for him? What about all the others in his storage facility? Is there some connection between Incite and Delos that we don’t know about, or is Serac operating all oh his own?

We now know five of the six parks – Westworld, Shogunworld, The Raj, Warworld, and Medievalworld? Fantasyworld? I’d be partial to Westorosworld or Thronesworld myself! I also loved the touch of having the bard play the Westworld theme song on his lute. Will we discover the theme of park six this season? Some people believe park 6 could actually be the “real world” that we see; that it’s an illusion and just another narrative. I hope that’s not the case, as it would render everything that happened in season two meaningless.

What are your thoughts, Westworld fans? Sound off in the comments!