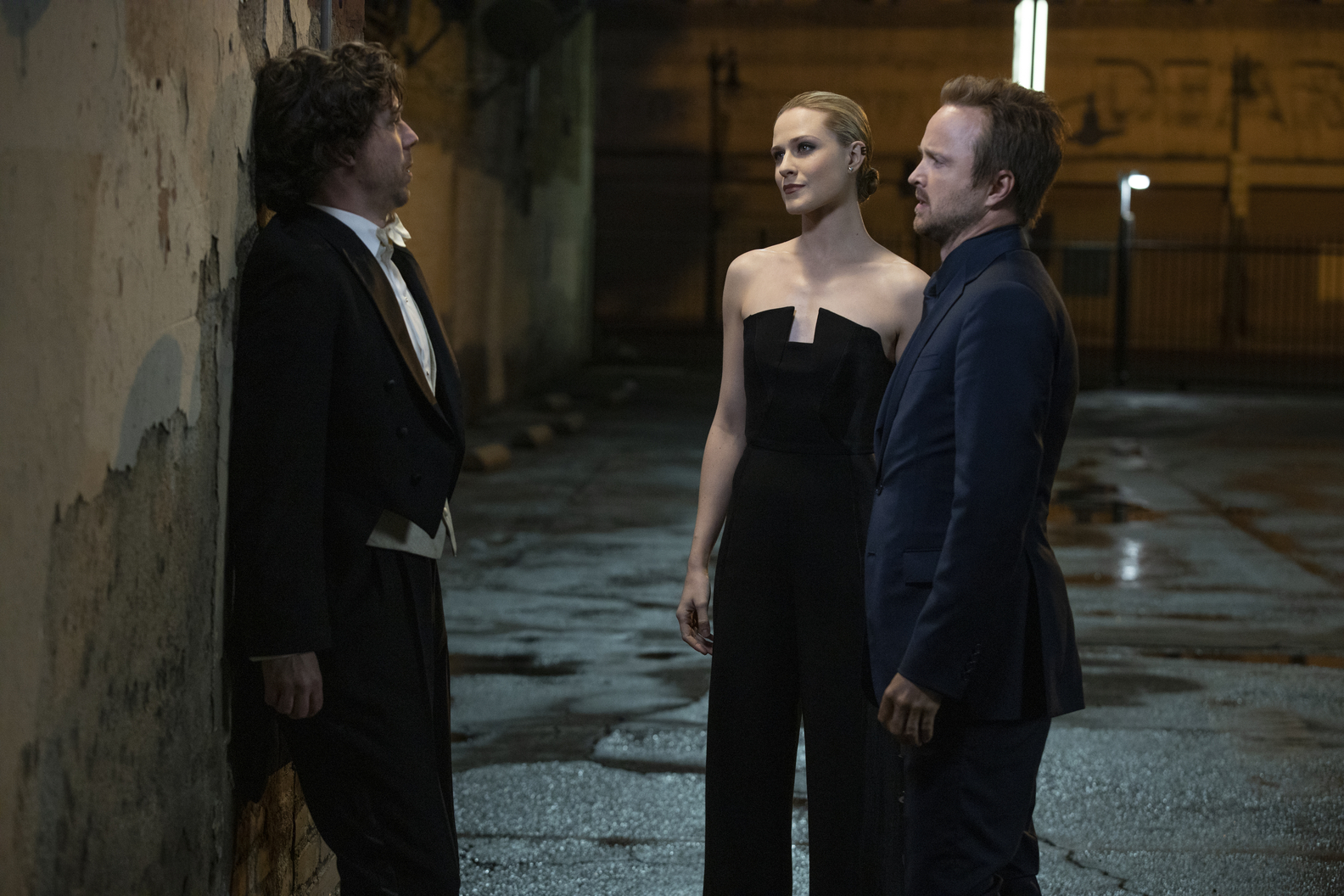 Sunday’s Westworld episode brought new revelations and even more questions – what is Dolores going to do with Liam and Bernard? Is she responsible for driving William insane? Can she bring Maeve to her side? Just how many Doloreses (Dolori?) are there? While we await the answers and see what the second half of the season has in store, let’s dig into this week’s interviews and videos! 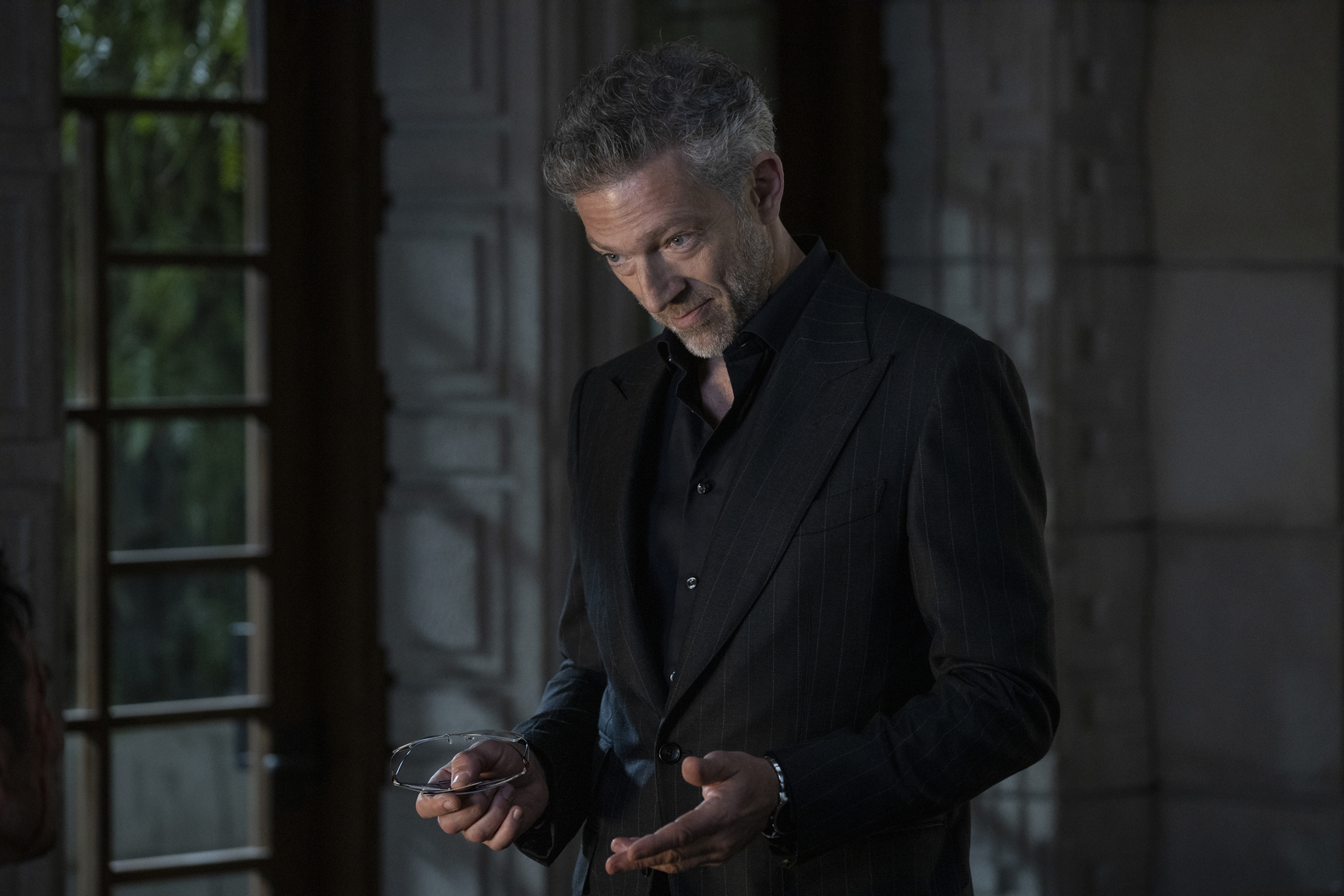 An article from SYFY WIRE reports on a fan theory that Serac (Vincent Cassel) isn’t actually a person but an avatar developed by the Rehoboam system to represent its interests in the real world. They reached out to Cassel for his thoughts on the matter. “Well, I think that the show proposes such a crazy world where everything is possible,” Cassel replies. “I think it can drive the audience to think that would be a possibility, because there is stuff like that in the show.”

Cassel shut the theory down, however, saying “it’s not the case.” Responding to a follow up question asking if Serac is a real person, Cassel confirms, “He is a real guy.” It seems proponents of the theory will have to come up with some new ideas for who Serac is and what he truly wants – unless of course he’s lying to us all… 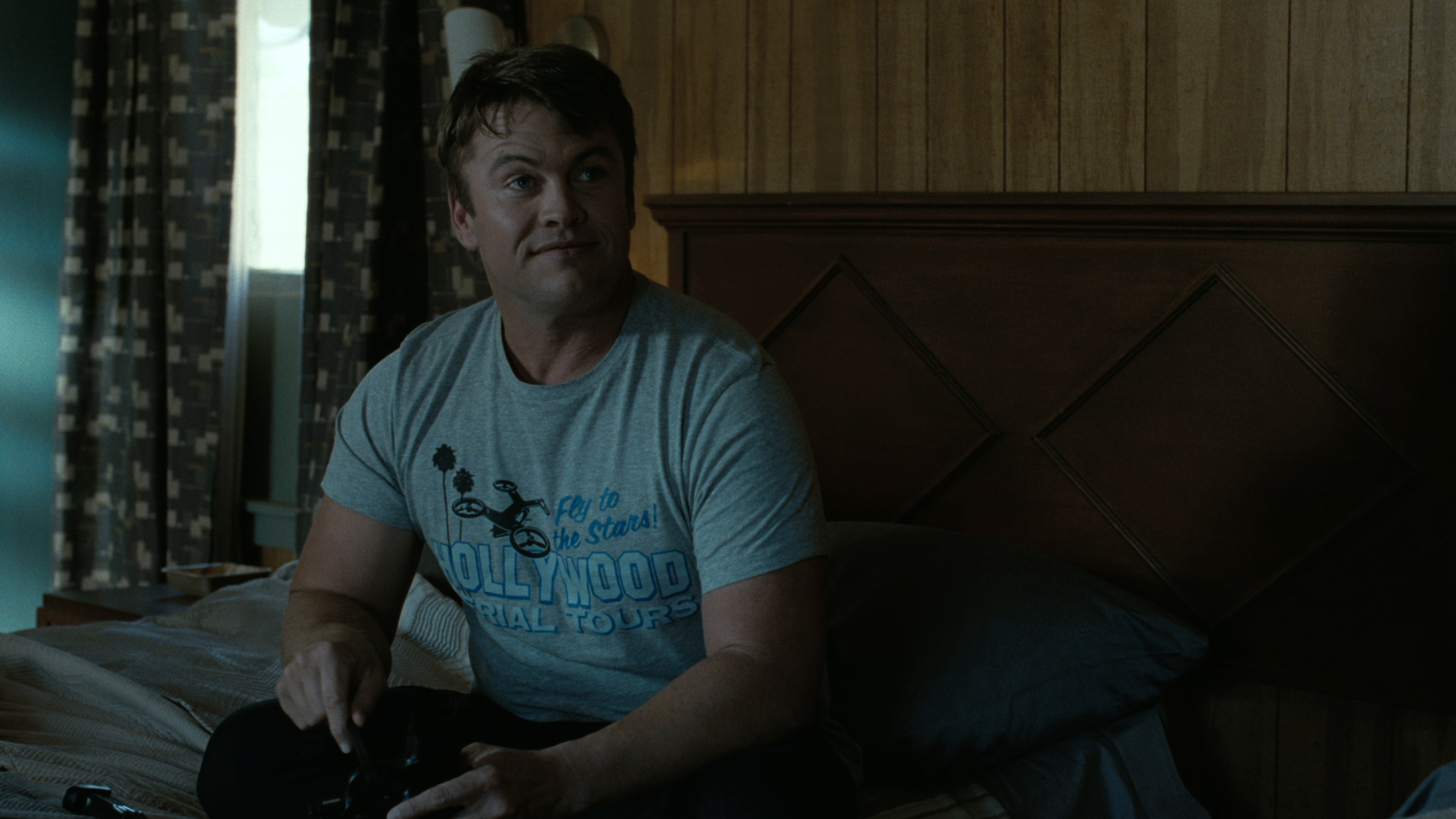 In the first of three Insider interviews, Luke Hemsworth describes what it was like filming his first big fight scene with Evan Rachel Wood. “It was amazing. She’s just like – I’m constantly in awe. She’s a workhorse and she’s so good. I’m a bit of a sponge, so I’ll just leech off everyone else and try to steal what they do. But she was kicking me in the face and she was slamming me against the wall. We weren’t half a–ing around. It was proper.”

Hemsworth confirms he didn’t use a stunt double until the very end. “That was me, up until the launch off the edge. I wanted to do it, but it was a long way down. So my wonderful stunt double threw himself off there and landed in this enormous stack of cardboard boxes, which was great to watch. I think I filmed it. Don’t tell anyone that.” Our lips are sealed. 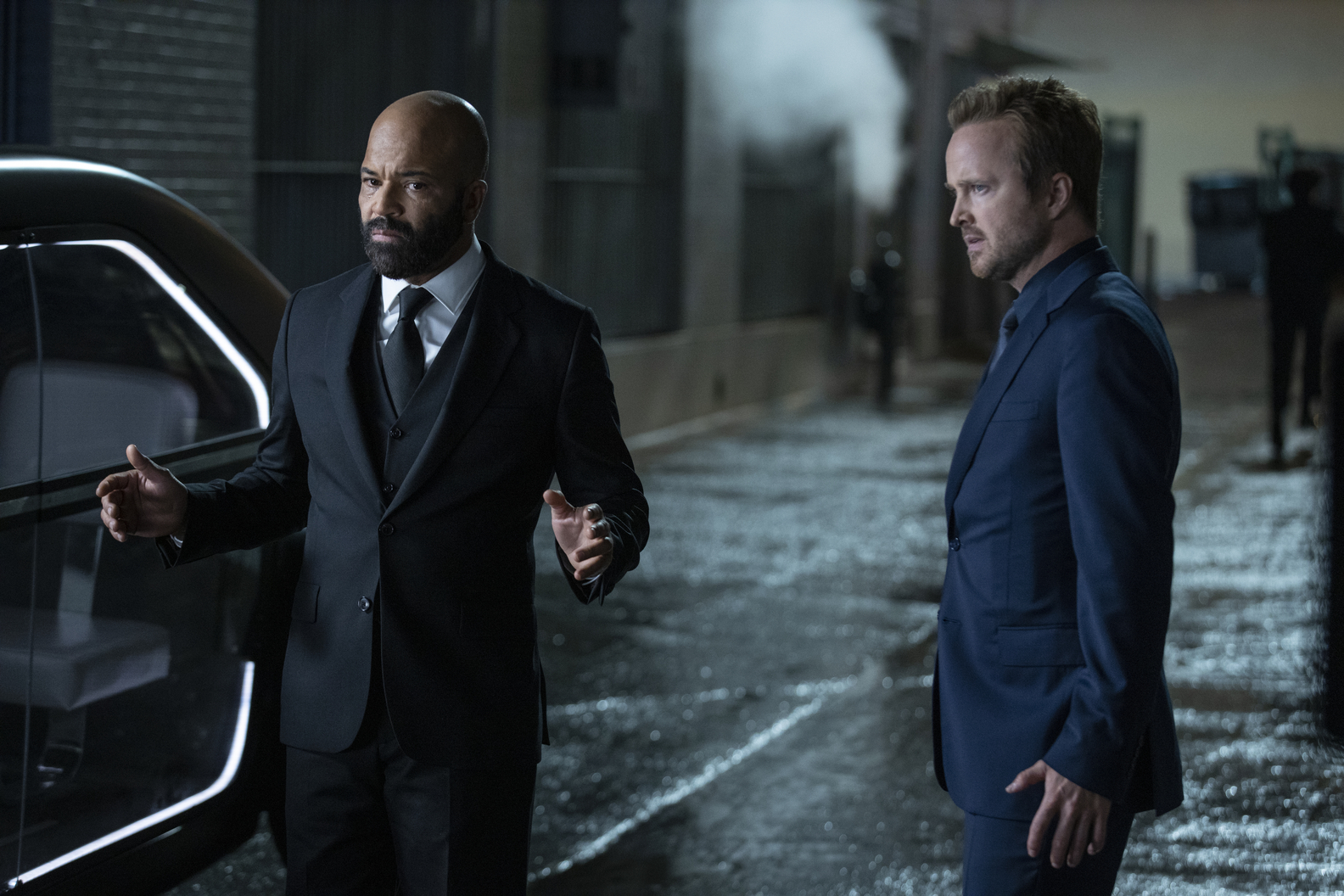 In a second Insider interview, Aaron Paul teases potential hidden depths to his character. “I think there’s a lot more to Caleb than you may think. God, this show is so funny [laughing] it’s so hard to not give everything away. I have a lot of thoughts, about a lot of things. [laughing] Um, yeah, yeah. It’s exciting, you know? I don’t know what’s real and what’s not.” Neither do we, for what’s it worth.

Expanding on Caleb’s backstory, Paul explains, “I think Caleb comes from a very complicated past…he prides himself on trying to be the best person that he can be. During his time at war, he saw some pretty heavy things and he lost people very close to him and he was lucky to get out of that, and come back and survive. So he wants to — he tries — to live on the straight and narrow, but he can’t bust through whatever chains he’s tied onto.” He adds, “But he has a limit, a line that he won’t pass.” If Dolores tries to push him, will his loyalty to her be tested? 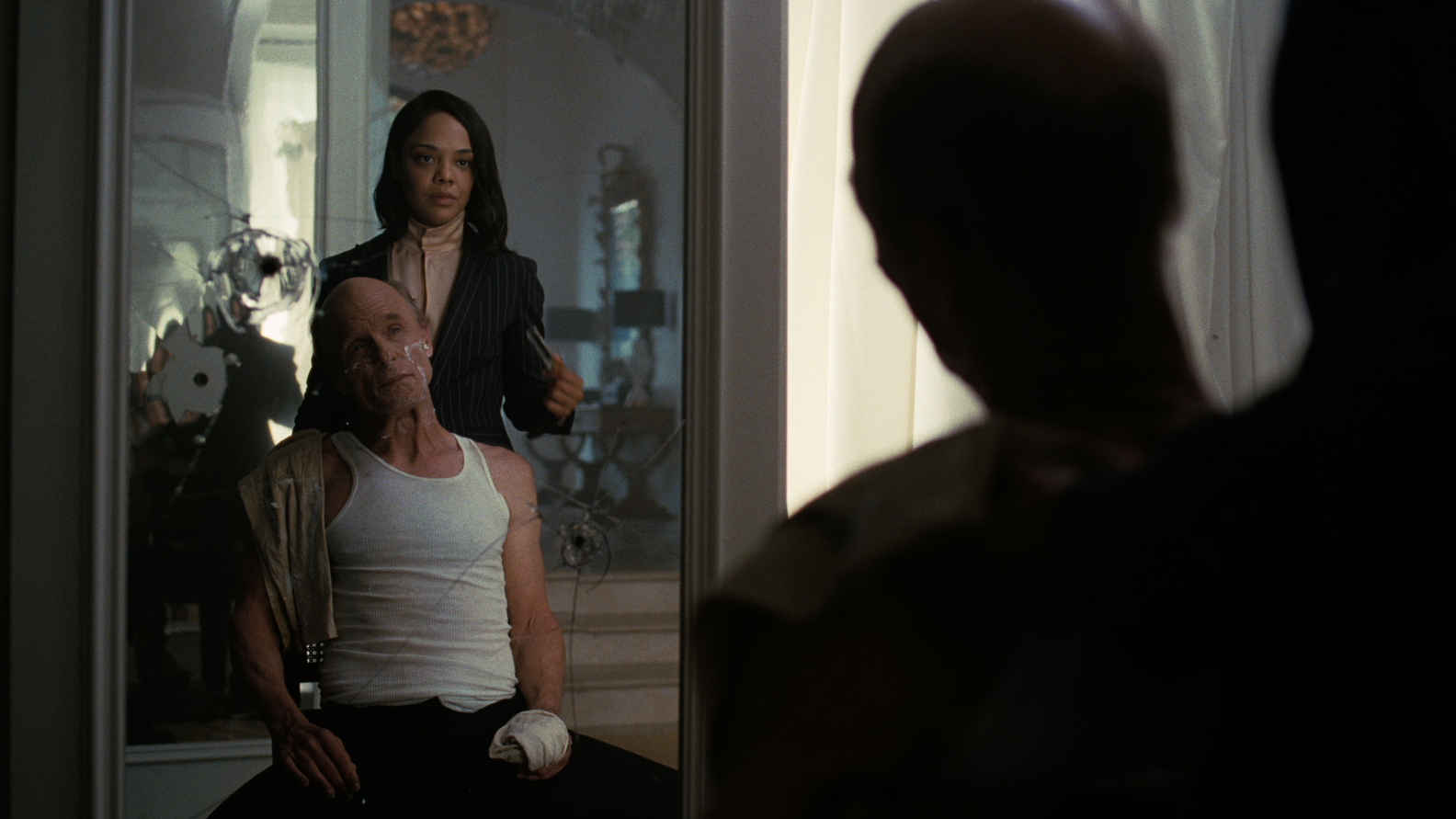 In the final Insider interview, Tessa Thompson speaks about Dolores’ revolution and what it may cost. “One thing Evan [Rachel Wood] and I spoke about a lot is this idea of how revolution is messy, and I think we’re in a time when we talk about what’s happening for women, movements like Time’s Up or #MeToo. If there was one cautionary thing people like to point out, it’s the casualties that have happened inside of this time.” She continues, “I would say that exists in every revolution and it’s necessary.”

Thompson also shares what it means to her character that she is a copy of Dolores. “I think personally for ‘Chalores’ one cost is her free will…Then she also realizes that inside of this mold, where there are many of them, there’s also a hierarchy of which of them is most important.” She states that even though they are copies they can also develop their own viewpoints. “[Dolores] sends those copies into different places, and thereby they’re in contact with different people. So their views about humanity change relative to who they’re in front of.” Perhaps Charlotte’s human family will have a profound affect on “Chalores” – as Caleb could have on Dolores as well.

Regarding Dolores and team’s ultimate goals for the uprising, Thompson explains, “I think they go into this real world with this idea of infiltrating and either destroying humankind or saving it. And maybe [those ideas] are one and the same, who knows? All that they’ve known about humans have been from the humans in the park. So arguably they’ve seen both the best of humanity and the worst. But now they see the world.” When the world has the wealthy elite oppressing everyone else, will Dolores truly try to save them…or will she leave them to fend for themselves while she goes after Serac? 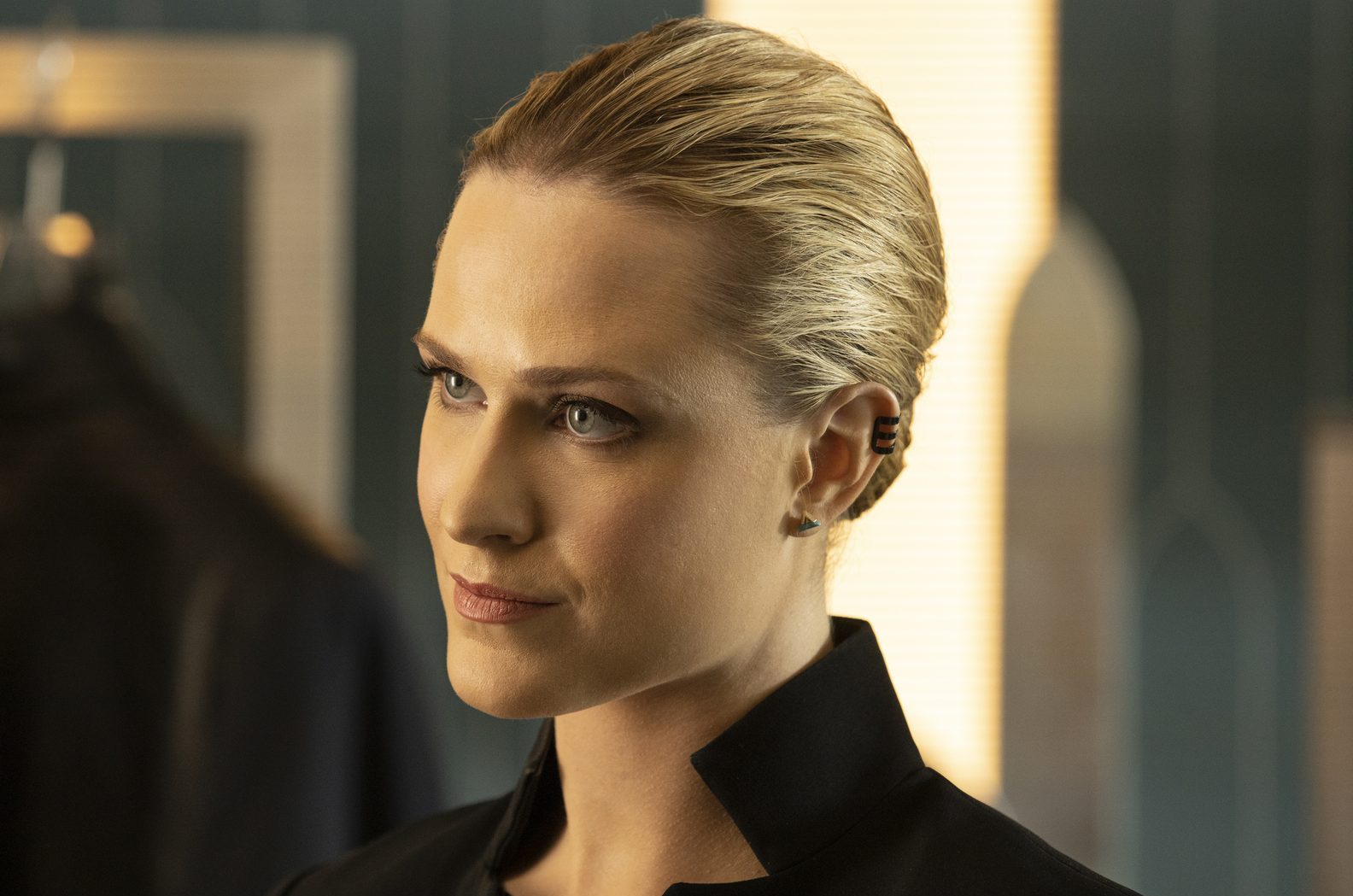 Lastly, showrunners Jonathan Nolan and Lisa Joy discuss the Dolores copies with The Hollywood Reporter. “We very carefully avoided the idea of clones and copies of hosts in the first couple of seasons,” Nolan says. “If Dolores is infinitely copyable, then is she still Dolores? One of the ideas we’re most fascinated with is identity, agency. Is Dolores a computer program? Or is Dolores a collection of her experiences? It’s one of the questions that’s the origin of the series: nature versus nurture. If we indulge in the idea of copies of the hosts too early, then the rules get threatened, and your affinity for and investment in Dolores — this Dolores — is threatened.”

“Now, in our third season, a fascinating thing for us to explore is this other way of approaching the question of identity. If you take two copies of the same person but set them on slightly different trajectories but with the same goals, would they remain the same person? Would they maintain the same goals? Or would some part of the character…has she absorbed any of [Charlotte’s] methods of thinking?” Nolan continues, “Or could a natural consequence of being in a different circumstance than the original Dolores be that they may not remain the same person anymore — that they may not even be allies?”

Why did Dolores copy herself rather than bring other hosts with her? Joy offers a couple of possibilities. “Maybe it’s the ultimate act of hubris to say, ‘I’m going to make and populate the new world with me.’ On the other hand, if you’re about to engage in something very dangerous, there’s something quite selfless in saying, ‘Nobody gets hurt anymore except me.’ There are so many ways to interpret the action. We won’t understand Dolores’ motivations fully until later on.” I’d like to believe it’s the second option, but only time will tell…

There was no video of “Creating Westworld’s Reality” this week, but HBO did release the final four episode titles and synopses for season three:

Episode 306, “Decoherence”: Do a lot of people tell you that you need therapy?

Episode 307, “Passed Pawn”: A real friend is one who walks in when the rest of the world walks out.

You can view the preview for episode five, “Genre,” below:

6 responses to “Westworld Post Mortem of “The Mother of Exiles””